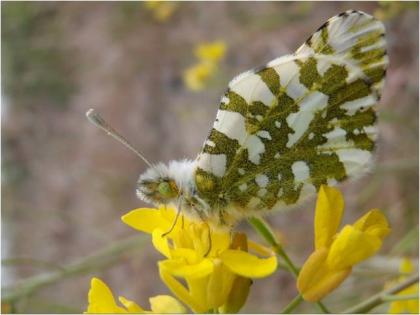 The island marble is a rare butterfly, restricted in distribution to San Juan Island. Originally petitioned for listing under the ESA in 2012, the U.S. Fish and Wildlife Service found “listing the island marble butterfly as an endangered species may be warranted.” In 2020, this species became listed as Federal Endangered due to habitat loss and degradation, predation factors and vulnerabilities associated with small population size..

Thought to be extinct since 1908, the butterfly was re-discovered by biologists during a prairie survey in San Juan Island National Historical Park in 1998, and a few years later on Lopez Island. However, it has not been seen on Lopez Island since 2006. The sole definitively extant population persists on the south end of San Juan Island.

NOTE: Reporting observations - If you believe you have sighted an Island marble in areas other than the south end of San Juan Island, please report it. Be sure to include a close-up photo of a perched individual.

The island marble is a medium-sized creamy white butterfly that measures approximately 1.75 inches (4.5 centimeters) wing tip to wing tip. It is white above, with black-patterned wingtips, and a fine black rectangle mid-wing. It has a mottled pattern of greenish-yellow on the underwings. The island marble’s flight pattern is straight, fluttering and fast. This species may feed and perch with wings either folded or flat.

They are most visible in the spring when they are winged adults. The adult flight period extends from approximately mid-April through late June. Adults feed on floral nectar, and more than 10 plant species have been documented as nectar sources, primarily of the mustard family (Brassicaceae).

Extensive research has been conducted on the host patch characteristics selected by females for egg-laying. Island marble females lay eggs on the flowers of specific mustard species, and when egg-laying are selective about individual plants, location within mustard patches, and at the micro-scale, flower phenology and the location on plants. Species that serve as larval hosts include field mustard (Brassica campestris), tall tumble-mustard (Sisymbrium altissimum), and Menzies pepper-grass (Lepidium virginicum var. menziesii).

Larvae feed on flowers, pedicels and developing fruits through five growth stages (instars) before leaving the host plant and making their way through the plant canopy in search of pupation sites. Larval survival is low (six percent to fifth instar), with threats including predation (especially by spiders), browsing deer, human disturbance, and weather events.

Pupation sites are located above the ground on senesced grasses or other low vegetation, within 25 feet of their host plant. This species spends the majority of its annual life cycle (July to April), including winter as a pupa (chrysalis).

After an island marble emerges from its chrysalis, where it has resided for more than 300 days of the year, it immediately mates and lays eggs on mustard plant flower buds, flying only a short time before dying. This long growth period and distinctive lifestyle have made this contributor to the islands’ ecosystem vulnerable.

Adults regularly travel from their natal patches and have been observed flying a mile or more.

This butterfly was found in a total of four distinct populations at 52 sites on San Juan and Lopez islands. It was originally known from only 14 specimens collected on Vancouver and Gabriola Islands in southwestern British Columbia, between 1861 and 1908. It was believed extinct, and then rediscovered at the San Juan Island National Historical Park in 1998, and formally described in 2001.

WDFW surveys found that most island marble sites and populations discovered early on are now extinct. After hundreds of surveys at potential locations in the San Juan Islands, Gulf Islands, Vancouver Island, Olympic Peninsula, and northern coastal Puget Sound, only a few small populations were found on San Juan and Lopez Islands. Because of its rarity and small population numbers, the governments of British Columbia, Washington, and the United States have identified it as a species of conservation concern.

Further, Island marble lay eggs only during a very tight phenological stage (unopened flower buds) of their host plants; host plants need to be available during the 2-3 week spring period when egg-laying occurs and remain palatable throughout the larval stages (into early-summer). Shifts in temperature and precipitation are likely to affect availability of egg-laying habitat and subsequent larval  survival by causing a mismatch between host plant phenology and adult emergence and reducing host plant availability to late-season larvae. These two effects have been observed already in the wild. Sea level rise paired with storm surges and windy conditions can inundate or cause significant sediment alteration in coastal habitats of island marble (e.g., amongst dunes and backing lagoons). Storm events and sea level rise can cause larval and pupal mortality and contribute to temporary or permanent habitat loss due to inundation, burial of host and forage plants, and loss of anchoring substrate and woody debris required for vegetation establishment. Recent storm events have been observed inundating occupied Island marble habitat, followed by loss of occupancy in these areas.

It is illegal under Washington State law to collect this butterfly, even for catch and release, without a state scientific collection permit. In addition, the National Park Service must approve any research, handling, or other study of the island marble on National Park property.

See the Climate vulnerability section above for information about the threats posed by climate change to the island marble. Other threats include conversion of this butterfly's habitat for development and encroachment of habitat by trees and shrubs.

Mustards, the larval host plants for the island marble, germinate and grow after ground disturbing activities like plowing, burning, and digging by animals and humans. While these activities can help create habitat for the Island marble, they can be damaging once the mustards are present. Mowing, grazing, trampling of vegetation, burning, plowing, and herbicides can harm or kill mustard plants. Pesticide use, including the biocide Btk (Bacillus thuringiensis var. kurstaki), on and around plants can kill butterflies and larvae.

Black-tailed deer predation, by way of eating the mustard flowers where eggs are deposited and larvae develop, is common and presents a threat to the butterfly. Erecting deer-exclusion fences in areas of habitat is an action that can help address this threat.

Many partners are working together to conserve and protect island marble butterflies.

The continued survival of the island marble hangs in the balance. People who live and work in the San Juan Islands are encouraged to get involved in the conservation of this rare butterfly. In 2020, some landowners enrolled in a Candidate Conservation Agreement with Assurance (CCAA). The CCAA is a conservation tool under the Endangered Species Act (ESA). Conservation measures outlined in the Island Marble Butterfly CCAA’s include creating patches of habitat, limiting disturbance to habitat patches, potentially protecting patches through fencing and potentially allowing deer hunting to limit deer consumption of the mustard plants that butterflies depend upon. In exchange, enrolled landowners—including those engaged in agriculture, ranching, recreation, and other activities—would experience no risk of violating the ESA by inadvertently killing or injuring the butterflies so long as they participate in the agreed conservation measures.

The U.S. Fish and Wildlife Service and the National Park Service have entered into a Conservation Agreement that implements conservation measures specifically addressing the needs of this butterfly. Biologists are conducting annual surveys for the island marble at known and potential sites. The National Park Service is controlling non-native invasive shrubs in Island marble habitat and has used prescribed fire to control native shrubs and trees. Partners in island marble conservation include the U.S. Fish and Wildlife Service, Washington Department of Fish and Wildlife, San Juan Island National Historical Park, Washington Department of Natural Resources, The Xerces Society, San Juan County Land Bank, the San Juan Preservation Trust, private landowners, and other organizations and individuals.

Research by the University of Washington and Western Washington University have advanced our understanding about threat factors, population size, life history, and habitat needs of the island marble.

Xerces –The Xerces Society for Invertebrate Conservation. 2012. Petition to list the island marble butterfly, Euchloe ausonides insulanus (Guppy and Shepard, 2001) as an endangered species under the US endangered species act. Portland, OR. Submitted August 22, 2012.