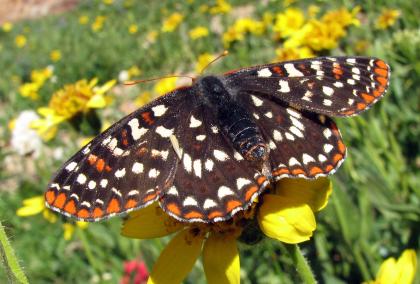 Taylor’s checkerspot is a Pacific Northwest endemic butterfly. It is currently restricted to a small scattering of 8 populations in Washington, a single population in British Columbia, and 2 populations in Oregon. The decline of this butterfly has accompanied the loss of open, prairie and grassland habitats.

The Taylor’s checkerspot is dependent on prairie and grassland habitats. It also occupies coastal bluffs and dunes as well as small forest openings (balds).

The species is currently restricted to a small scattering of eight populations in Washington, a single population in British Columbia, and two populations in Oregon. Like other butterflies that rely on these habitats in the Willamette Valley-Puget Trough-Georgia Basin ecosystem, it has declined dramatically due to widespread habitat degradation and loss of prairie-oak ecosystems from development, invasive species, and loss of beneficial disturbance mechanisms. Habitat enhancement efforts for Taylor's checkerspot since 2006 have been significant, however, the amount of fully-restored habitat relative to need is low, and the configuration of habitat remains fragmented and isolated.

Females emerge in the spring and lay eggs on host plants of the family Scrophulariaceae, which are often specific to sites (or populations); these include harsh paintbrush (Castilleja hispida), marsh speedwell (Veronica scutellata), American brooklime (V. beccabunga), and non- natives including plantains (Plantago lanceolate and P. major) and thyme-leaved speedwell (V. serpyllifolia ssp. serpyllifolia). When the caterpillars emerge, they depend on these primary host species for food until early summer, when they enter an inactive diapause stage (a state of suspended development).

Emerging from a diapause in late winter, the caterpillars feed more broadly on the primary hosts and other post-diapause food plants that may be available, including sea blush (Plectritis congesta), blue-eyed Marys (Collinsia parviflora and C. grandiflora), and dwarf owl-clover (Triphysaria pusilla).

The Taylor’s checkerspot was historically found in open, prairie and grassland habitats from southeastern Vancouver Island, British Columbia, south through the Puget Trough in western Washington, and into the southern Willamette Valley in Oregon. Its distribution included 45 documented locations in Washington from the San Juan Islands south to the Cowlitz River in Lewis County.

Today, the butterfly is restricted to 11 known populations: eight in Washington, one in British Columbia, and two in Oregon.

For a map of worldwide distribution and other species’ information, check out NatureServe Explorer.

In the decade that has passed since the original Washington status review, extirpation of the butterfly has been observed on seven of the 10 sites. Also during this decade, searches continued for Taylor's checkerspot in previously unsurveyed landscapes on the Olympic Peninsula, and five new sites were located within the Olympic National Forest. Despite continued exploratory searches to locate additional populations, none have been found since 2009.

Due to the small number of mostly isolated populations, continued threats to habitat from invasive native and non-native plants, and vulnerability to severe weather events, Taylor's checkerspot remains threatened with extinction throughout its range in Washington. See the Climate vulnerability section above for details about threats posed to this species by climate change.

The Sustainability in Prisons Project

WDFW participates in this project, which is a partnership founded by The Evergreen State College (TESC) and Washington State Department of Corrections (DOC). With critical input from many additional partners such as WDFW, TESC and DOC develop and deliver a wide range of science, sustainability and environmental education programs in all 12 Washington State prisons. Learn more about this project and watch a film that shares the experiences of formerly incarcerated partners who have made a significant contribution through their efforts to help perpetuate imperiled species, such as the Taylor’s checkerspot butterfly. This film was made prior to the COVID-19 pandemic.

Severns, P. M. and A. D. Warren. 2008. Selectively eliminating and conserving exotic plants to save an endangered species from local extinction. Animal Conservation 11:476-483.