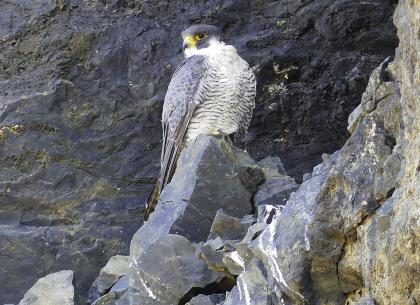 A peregrine falcon perched on a cliff. 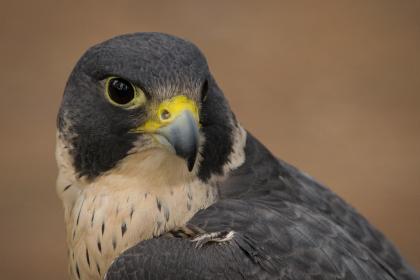 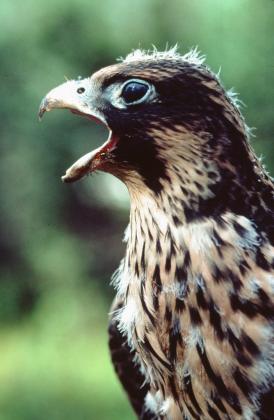 Peregrine falcons have experienced a remarkable recovery and the population continues to increase across Washington. The species remains classified as "protected wildlife" under state law (WAC 220-200-100) and continues to be protected under the federal Migratory Bird Treaty Act.

Peregrine falcons are 16 to 20 inches in length and have a wingspan ranging from 36 to 44 inches. Adults are dark bluish-black above with a dark cap and wide 'sideburns'; their underside is barred. Adults have yellow coloration around their dark eyes, yellow on the upper part of their beak, and yellow feet. Juveniles are dark brown above and have vertical streaking on their underside.

Peregrine falcons usually nest on a cliff near water, but as the species recovers and its range expands, they can also be found nesting on human-built structures, such as tall buildings or bridges, and other locations that offer security and a vantage point above surrounding terrain.

Peregrine falcons are predators of other birds ranging in size up to waterfowl and gulls. They hunt primarily in areas of open cover types that include estuaries, agricultural fields, coastal beaches, water bodies, and in some urban areas.

They are generally monogamous, and may form long term pair bonds.

Peregrine falcons breed up to about 3000 feet in elevation (sometimes higher) in nearly all parts of the state. The highest densities are along the northern outer coast and San Juan Islands. They are also found in Cascade Range foothills, along the Columbia River, and in other water bodies within the Columbia Basin.

This is an uncommon resident, migrant, and wintering species in western lowlands, and a rare to uncommon summer resident and migrant in the mountains and eastern lowlands.

Overall sensitivity of peregrine falcons is likely low-mod as this species utilizes a variety of habitat types and forages on a diversity of species. Coastal Peale's peregrine subspecies is highly dependent upon seabird prey; therefore climate change that affects ocean warming and upwelling in coastal areas could affect prey of seabird species (Cassin's auklet and Rhinoceros auklet). Studies in Hudson Bay demonstrate declines in peregrine productivity due to climate change and its affects on increased frequency of heavy rainfall events that lead to increased nestling mortality.

Falconry is the art of training raptors (birds of prey - falcons, eagles, hawks, and owls) to hunt in cooperation with a human and is the sport of actively pursuing wild quarry with those birds. The Washington Department of Fish and Wildlife issues falconry permits, regulates the sport, and remains in contact with the falconry community. No one under any circumstances may keep a raptor as a pet. Only licensed falconers may have birds of prey, and these birds must be flown freely and hunt regularly. State and federal regulations, expertise and dedication of falconers, and self-policing by the falconry community keep the birds in high-quality care. Learn more about the history of this sport and the requirements for falconry in Washington.

Shortly after the Second World War, peregrine falcons exhibited well-documented population declines across North America and much of their global range following the widespread use of DDT. The falcon was listed nationally as an endangered species by the U.S. Fish and Wildlife Service in 1970 and by the Washington Fish and Wildlife Commission in 1980 when only five pairs were found to be nesting statewide.