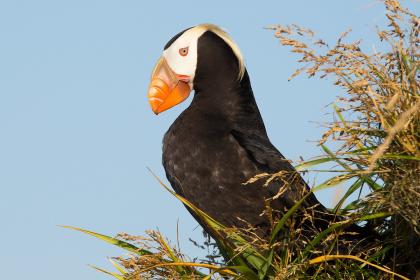 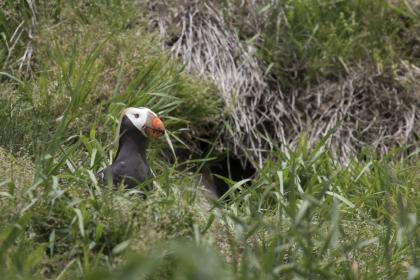 In Washington, this striking seabird with its white face and large orange bill has experienced an order-of-magnitude population decline in recent decades and has disappeared from more than half of its historical breeding sites. Sources of impacts have not been clearly confirmed.

During the breeding season, tufted puffins are distinct in appearance, with a large orange and yellow bill, a white mask, yellow eyes, and a pair of yellow feathered tufts that arch backward from their eyebrows. Their bodies are primarily brownish-black, and their feet are orange. Wintering adults retain some orange in their bills but do not have a white mask or yellow head tufts. Juveniles have a smaller yellowish bill and are dark brownish-gray above and lighter below.

Tufted puffins gather in colonies on isolated offshore islands and in accessible headlands during spring and summer to build nests and rear young. During the non-breeding season, tufted puffins winter alone or in small groups at sea.

Foraging occurs from nearshore waters to open sea during the breeding season. They are members of the auk family, with stocky bodies adapted to “flying” underwater as they dive in pursuit of a wide range of fish and invertebrate prey.

The breeding season extends from mid-April to early September in Washington. Nesting occurs in burrows where a single egg is laid. Rocky areas and thickets are sometimes used for nesting. Preferred nesting habitat includes grassy slopes, bluffs, and plateaus with soil deep enough for burrowing in locations free of introduced predators and human disturbance.

Incubation is performed by both members of the breeding pair and usually lasts between 43 and 46 days. Rates of chick growth and survival depend on prey availability and quality. Nesting tufted puffins prefer to forage locally for their nestlings, and are famed for carrying many – occasionally more than 20 – small fish at one time, neatly lined up and carried crosswise in their large bills. In scarce prey years, adults will feed the most nutritious food to their chicks until fledging, at which time the chicks are fully independent.

Tufted puffins at colonies experience predation from bald eagles and other predators, and kleptoparasitism (food stealing) by gulls.

The tufted puffin is found throughout the upper latitudes of the North Pacific Ocean. It spends the winter at sea, and nests during spring and summer in coastal colonies from California north to Alaska, and from Siberia south to Japan. Steep population declines throughout the southern part of its range suggest that the species may be undergoing a significant range contraction.

In Washington, breeding occurs on islands along the northern outer coast and in the Strait of Juan de Fuca. The population has been declining since at least the 1980s, with minimum population estimates falling from 23,342 birds in 1978 through 1982 to 2,958 birds in 2009, and only 19 of 44 historical breeding sites remaining occupied.

The species is very rare during the winter months.

Tufted puffins will mainly be sensitive to climate change through alterations to their breeding habitat and food supply. Predicted increases in sea surface temperature could lead to declines in abundance of zooplankton and small forage fish that puffins and other seabirds prey upon. Local declines in prey availability could lead to slower growth rates and reproductive failure. Additionally, sea level rise could impact nesting and foraging habitat by altering the intertidal and subtidal areas. Nesting habitat (i.e., burrowing sites) could also be impacted by increased storm frequency, through damage and destruction of nesting areas.

Formerly common in Washington along the outer coast and in the Strait of Juan de Fuca and San Juan Islands, tufted puffins have suffered the reduction and disappearance of many breeding colonies in the state, accompanied by a dramatic population decline. Reasons for the decline are uncertain, but may include reduced prey availability, predation at nesting colonies, human disturbance (mainly historical), and factors related to climate change.

See the Climate vulnerability section above for more information about the threats posed by climate change to this species.