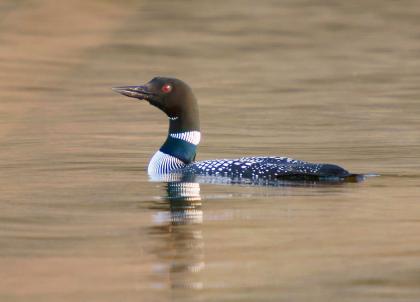 The common loon has a small breeding population in Washington. Its overall range has contracted northward. Due to life history and a small population in Washington it is highly vulnerable to impacts if not monitored and managed where appropriate. Increased development and recreational pressure at sensitive nesting lakes must be actively managed to prevent further loss of nesting loons.

Common loons typically measure 26 to 36 inches, with a 50 to 55-inch wingspan. They weigh 8.4 to 19 pounds. Loons have powerful legs set far back on their body, making them highly adapted for swimming and diving, but incapable of walking on land. Males are larger than females and territorial individuals tend to be larger than those not on territories. Both male and female common loons bear black and white plumage during the breeding season. Full alternate (breeding) plumage is not attained until 36 months of age. Subadult loons may remain in basic plumage year-round. In winter, loons acquire gray plumage above and are white below.

Learn about and listen to different loon calls.

In winter, the majority of common loons reside in marine and estuarine coastal waters. Larger inland lakes, reservoirs and rivers are used during migration and also in winter.

North American banding studies show that common loons do not begin breeding until at least 6 years of age. Since loons cannot walk on land, they require nesting sites at the very edge of deeper waters, in marshy portions of lakes in water depths typically around 2 to 3 feet. Breeding habitat requires usually clear lakes containing both shallow and deep-water areas, or aquatic vegetation mats extended out from shorelines over deeper water. Nest sites include hummocks of reeds/cattails separated from the mainland, small islands, and floating logs that have thick vegetation side cover (tall grass, cattail, small shrub). Optimal nests sites include overhead cover to conceal eggs from predators, protection from wind and waves, allow good visibility for incubating adults, and a steep underwater slope adjacent to the nest for adequate underwater approaches and exits.

Egg-laying in Washington generally begins between mid-May and mid-June. The earliest known consistent egg laying date is end of April from one pair in western Washington. Incubation is usually 25 to 32 days. Chicks leave the nest within 24 hours of hatching and are soon moved to nursery areas for rearing, which are typically located in shallow coves of fairly uniform depth, sheltered from prevailing winds and wave action, and may be independent of the nest site location. Chicks up to three weeks of age may be carried on their parents' backs. Most juveniles are capable of flight at 11 to 12 weeks, and some leave their small, natal lakes or parental territories shortly afterward.

Non-breeding loons (single non-territorial “floaters”) tend to aggregate during summer in nearshore marine waters, but also will also spend summers inland at unoccupied lakes and freshwater bodies. Life span is estimated to about 30 years. The oldest known loon in Washington is 25 years.

Adult loons are considered an apex species, and so predation of adults on their breeding lakes is considered rare, but there is documentation of a bald eagles in Washington predating on a breeding adult loon on its territory. As bald eagles have increased in numbers, loon chicks and eggs have been increasingly prone to eagle predation; eagles are likely the largest cause of chick mortality in recent years. Other lesser predators are mink and raccoon.

Common loons breed in freshwater habitats of northern North America including much of Canada, Alaska, northern portions of the contiguous United States, and southern Greenland. They also breed in Iceland. The southern portion of their historical breeding range has contracted. Western North American residents spend winters on inland larger freshwater bodies and marine environments from Alaska to northern Mexico.

Common loons were once described as a fairly common breeding species both east and west of the Cascade crest, but likely declined between 1890 and 1925 in much of Washington. Declines across the United States during this period are thought to have been the result of hunting, shoreline development and habitat alteration at nesting lakes.

In Washington, breeding areas are freshwater lakes and reservoirs, mainly in remote areas in the northern tier of the state. Common loons spend the winter in almost all nearshore marine habitat and larger freshwater bodies of western Washington. They are uncommon and irregular in winter in eastern Washington where they are found in large water bodies and Columbia Basin impoundments. The size of Washington’s breeding population is small, currently known at around 23 pairs and estimated in total at less than 50 pairs.

Though limited information is available regarding the sensitivity of common loons to climate change, they may experience some direct sensitivity to climate change through northward contractions of their range with increasing temperatures and altered migration timing. Their sensitivity may be increased by changes to their prey and habitat. For instance, Pacific herring, a primary food source for loons, have previously experienced declines during El Niño years, leading to high mortality for loons; more frequent and stronger El Niño conditions could lead to greatly decreased food supply for loons.

Managing use of lead fishing tackle

Ingestion of small lead fishing tackle is the leading cause of known mortalities of the common loon.

Managing the use of lead fishing tackle at the 13 lakes in Washington where loons breed and rear young is intended to improve loon survival by keeping loons from being poisoned by ingesting small lead fishing gear lost by anglers.

Restrictions on lead usage at those lakes were adopted by the Fish and Wildlife Commission in December 2010 and went into effect on May 1, 2011. These rules prohibit the use of lead weights and jigs that measure an inch and a half or less along the longest axis at 12 lakes:

In addition, the use of artificial flies containing lead at Long Lake (fly gear only) in Ferry County is prohibited.

As of 2020, at least 8 additional new breeding lakes across Washington have been discovered.

Information on lead-free alternatives, including manufacturers and retailers, is provided by LoonWatch.

See the Climate vulnerability section above for information about the threats posed by climate change to this species. In addition, the use of rotenone to kill unwanted fish may affect the food supply of common loons for several years.

See the Regulations section above for information about managing the use of lead fishing tackle.

In 2020, WDFW initiated efforts to form a cooperative oversight body, consisting of state and federal agency representatives, tribal nations, private and commercial landowners, Biodiversity Research Institute and adjunct scientists, and an interested citizen science community. Their mission is to foster collaboration and communication to advance effective conservation and management of common loons.

See the Regulations section above for information about managing the use of lead fishing tackle.

Past introductions of salmonids and other fish for sport fishing to many naturally fishless lakes in Washington has provided additional prey resources for common loons, particularly in the northeast. These lakes are prone to freezing in winter, so that trout usually are not able to survive to reproduce, and they require yearly stocking by state fishery managers for sport fishing, usually with trout fry or fingerling-size trout. Supplemental fry also provide prey for loon chicks at a critical age period transition between 1 to 6 weeks of age.

WDFW and conservation partners have placed artificial nesting platforms for common loons in lakes and reservoirs to keep loon eggs dry and safe despite water level fluctuations. Some platform installations on large King County reservoirs have been in place since the late 1980s, including Chester Morse and S. Fork Tolt (Seattle City Light), and Howard Hansen Reservoir (Tacoma Power). The use of platforms as a substrate for nest-building in Washington has generally been successful, with some used for nesting by common loons almost immediately after deployment; others have not attracted loons in 20 years since attempting. In 2016, there were 13 territories in Washington that had artificial rafts deployed, and 11 of 16 loon pairs (69 percent) attempted nesting on artificial platforms.