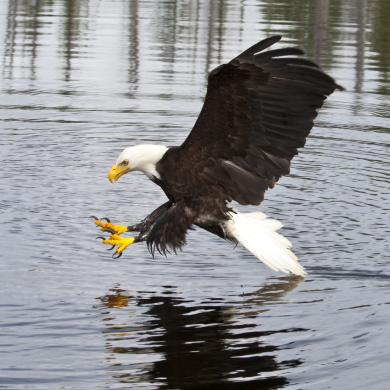 The bald eagle is protected under the Bald and Golden Eagle Protection Act, and has experienced recovery as a result of DDT removal from most of its range.

Bald eagles nest in large trees, usually near marine shorelines, large lakes, or rivers. They prey on fish, waterfowl, and small mammals, or scavenge. Many birds that nest in Canada and Alaska migrate south to overwinter in Washington, concentrating on rivers with spawned-out salmon, especially chum.

Bald eagles generally first breed at about 5 to 6 years of age, and adults may not lay eggs every year. They commonly roost communally, especially in winter. Bald eagles return to their breeding territories year after year and may repair and use the same nest for many successive years. They can also construct alternate nests within the territory. Territories also typically contain large perch trees.

The resident population of bald eagles was about 1,500 breeding pairs as of the last comprehensive census conducted in 2005. This includes up to 4,000 individuals that overwinter in Washington.

Bald eagles nest primarily along marine shorelines and major rivers of western and northeastern Washington. Nests are rare or absent from the Columbia Basin and southeastern Washington, but overwintering birds can be locally common.

Breeding habitat most commonly includes areas close to coastal areas, bays, rivers, lakes, reservoirs, or other bodies of water that reflect the general availability of primary food sources, such as fish, waterfowl, or seabirds.

Nests are usually constructed in large trees. Tree species used for nesting vary and may include conifers and hardwoods. Winter roosts are usually located in uneven-aged patches of trees in locations protected from wind and inclement weather.

Bald eagles may experience some sensitivity due to habitat and foraging requirements. Nest sites may be affected by altered disturbance regimes (e.g., fire and wind) while warmer temperatures and changes in precipitation could limit food availability and quality (i.e., salmon carcasses). However, bald eagles are opportunistic foragers and may be able to switch prey species.