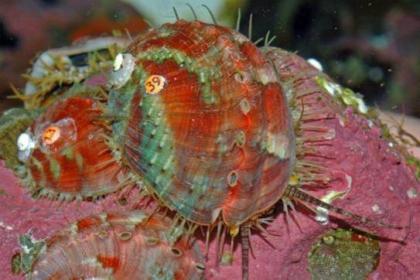 Abalone is the common name for a group of large marine snails (gastropod mollusks in the genus Haliotis).  Abalone populations worldwide have been in decline due to over-harvest and habitat degradation.

Pinto abalone are an endangered species in the State of Washington. Find more information in our status review document or recovery plan.

Abalone are broadcast spawners, meaning that they release sperm and eggs into the water column where fertilization occurs.  Planktonic larvae drift in the water column for a period of 10 to 14 days when they go through metamorphosis and settle onto rocky bottoms. As adults, abalone graze on algae and diatoms.

Abalone typically have a small home range and in order for successful fertilization males and females must be in close proximity.  When the density of adult spawners is too low, their ability to fertilize and successfully reproduce is hindered by a relatively short period of gamete (egg and sperm) viability.  Evidence suggests that populations may decline due to lack of reproduction when densities drop below 0.30 to 0.15 abalone per square meter.

Pinto abalone (Haliotis kamtschatkana) ranges from Baja California, Mexico to Alaska.  It is the only abalone species found in Washington state, British Columbia and Alaska and is therefore also referred to as the "Northern" abalone. Abalone exist in aggregations and are associated with complex rocky reef habitat.  Pinto abalone in Washington State are generally found between water depths of 9 to 60 feet.  The abalone's specific habitat associations and distribution in relatively shallow water makes them particularly vulnerable to harvest.

The main sensitivity of Northern abalone to climate change is likely to be from direct physiological responses to predicted decreases in pH. In laboratory experiments, elevated carbon dioxide levels led to decreased larval survival and increased shell abnormalities in Northern abalone. In other abalone species, simulated ocean acidification conditions have also resulted in decreased hatching rates and reduced larvae survival. Potential climate-related changes in preferred habitat of kelp beds with coralline algae could increase the sensitivity of this species, as these habitats may be sensitive to increasing sea surface temperature and could experience declines, thus limiting potential abalone habitat. Increases in sea surface temperature could also lead to decreased abalone reproduction and increased mortality. Given the current low population densities and recruitment levels of Northern abalone, any future threats from lower pH or increasing temperature could have an even greater impact on this species.

A commercial fishery for pinto abalone was never authorized in Washington State. Historically, intertidal subsistence harvest occurred but the magnitude and extent are not well reported.  Pinto abalone were first classified in Washington as shellfish in 1959 when a daily personal harvest possession limit of 3 was imposed.  In 1980 a 3.5 inch minimum harvest size was implemented.  In the early 1990's fisheries biologists responded to signs of pinto abalone population decline by imposing harvest gear restrictions, reducing the daily possession limit and increasing the minimum harvest size to 4 inches.  Despite these management measures populations continued to decline and in 1994 the fishery was closed and has remained closed ever since.

Despite the harvest closure in 1994, Washington State abalone populations continue to decline. Abundance may be too low in Washington State to allow reproductive success.  Ongoing and historical studies conducted by WDFW in the San Juan Archipelago, a region of historically healthy abalone populations have shown more than a 97 percent decline in surveyed abalone population abundance between 1992 and 2017 (Rothaus et al. 2008, WDFW unpublished data).  Average pinto abalone density from the most recent survey was 0.005 abalone per meter squared.  Average densities of pinto abalone have been below the presumed minimum threshold for successful spawning since  1994.

Pinto abalone have been listed as a "Species of Concern" by the Federal National Oceanographic and Atmospheric Administration (NOAA) since 2004. In 2009, pinto abalone (referred to commonly as northern abalone in Canada) were listed as "Endangered" under Canada's Species at Risk Act.  In 2013 NOAA received two petitions to list pinto abalone under the Federal Endangered Species Act.    Ultimately, NOAA did not recommend Federal protection for the species, citing that it did not meet criteria of being in danger of extinction throughout the entirety of its range. In Washington State, pinto abalone were designated a State Endangered Species in 2019.

The overall goal of the abalone recovery team is to halt the declines of abalone populations in the Pacific Northwest and to return populations to self-sustainable levels.  Such a long term goal requires a suite of interim goals and the development of numerous methodologies.  To date, such interim goals have enabled the abalone recovery team to successfully:

This body of work represents nearly two decades of basic and applied science and has laid the foundation for increasing the scale of the abalone recovery effort.   Such an effort will require a broad coalition of scientists, advocates, policymakers, and volunteers. For more information on this process please contact WDFW lead abalone biologist Katie Sowul.