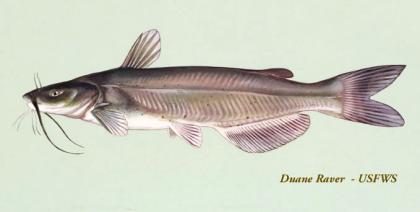 Channel catfish are one of several species from the catfish family that occur in Washington and are probably the most popular because of the large size they can attain and they are considered excellent eating. Channel catfish are the only established catfish species in Washington with a forked tail. The three species of bullhead catfish (brown, yellow, and black) occurring in Washington have a lobed tail. The fork in the tail of older and larger channel cats (greater than 10 pounds) may be worn and less pronounced, but the size of these fish should prevent confusion. Bullhead catfish normally top out at 2-3 pounds. Juvenile channel cats are usually light blue to grey, with prominent dark spots along the sides. As they grow, their coloration may darken and the spots will become less distinct. Though uncommon, albino channel catfish (pure white their entire lives) may also be encountered.

Channel catfish average 16-24 inches in the 2-5 years post stocking. Some individuals will live 15-20 years, grow over 30 inches in length and weigh in excess of 30 pounds.

Channel catfish are well-established and naturally reproduce throughout the lower Columbia, Snake, Walla Walla, and lower Yakima Rivers and the lower reaches of their tributaries. Highest densities occur in the Yakima and Snake River. In lowland lakes, channel catfish are not known to spawn and require regular stocking to maintain recreational fisheries. Thus, the Washington Department of Fish and Wildlife stocks many lakes throughout the state to provide this opportunities for this popular fish, both "dinner-size" and trophy.

Anglers age 15 and older must have an annual freshwater, combination or Fish Washington license. Licenses can be purchased online; by telephone at 1-866-246-9453; or at hundreds of license dealers across the state.

The general statewide regulation for channel catfish is a five-fish limit, with no minimum size. Several small lakes where channel catfish are stocked have a two-fish limit. In the Columbia, Snake and Yakima rivers, there is no daily bag limit on harvest. Regulations may change from year to year, so make sure you consult the latest fishing regulations pamphlet for accurate information on the water you intend to fish.

Fishing improves throughout the spring, peaking before the spawning period in June and July. Fishing may pick up in early Fall, followed by a decrease in action as waters cool. Winter is a difficult time to target this species.

"Adult channel cats are known to forage on an incredible variety of food organisms, including frogs, crawfish, clams, snails, worms, pond weeds, seeds, snakes and birds, in addition to the more traditional forage of fish and insects. As with the other catfish, feeding activity is generally greatest at night, but this species seems to rely more on sight than bullheads do. It is not unusual for bass anglers to catch channel catfish on diving plugs, spinners, plastic lures, and even surface lures.

The best technique for targeting channel catfish is fishing any number of smelly baits right on or near the bottom.   The excellent olfactory sense of catfish makes baits with a strong odor very effective.  Popular baits include worms, liver (chicken or beef), hotdogs, shrimp, cut bait (usually an oily fish like herring), and manufactured or homemade stinkbaits/doughbaits.  Because fancy lures are not required, catfishing is relatively easy, inexpensive and does not require specialized equipment.   All you need is a hook, a weight, and something to attract these scent-driven predators.   Catfish make excellent table fare and many anglers consider catfish taken from cool, clean water to be the ultimate in piscatorial cuisine.