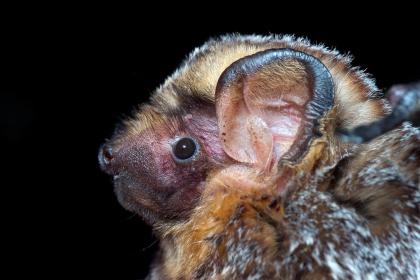 White-tipped hairs on its dark coat gives this bat's fur a "hoary" look.  (Oregon State University - Creative Commons)
Category: Mammals
Wild Washington lesson plans
If you see this species, please share your observation using the WDFW wildlife reporting form. Providing detailed information such as a photo and exact coordinates will improve the confidence and value of this observation to WDFW species conservation and management.

The hoary bat is a widely distributed migratory bat that is vulnerable to mortality from wind turbines during migration. It also faces threats from habitat alteration throughout its range.

White-nose syndrome is a deadly fungal disease that has been confirmed in some Washington bat species, but to date, no diagnostic evidence of the disease has been detected in hoary bats. It is unclear which species of bats may be vulnerable to this disease in Washington. This disease does not affect humans, livestock, or other wildlife.

The hoary bat is the largest bat in Washington; they are 5 to 6 inches long and have a wingspan of about 15 inches. The fur is a mixture of yellowish-brown, dark brown, and white, giving it a distinctive frosty or “hoary” appearance. Individual hairs on the back have four distinct color bands, with blackish-brown at the base followed by yellowish-brown, blackish-brown, and silvery white at the tips. Yellow or white fur occurs on the shoulders and wrists. Yellow fur also encircles the ears and is present on the throat and underside of the wing membranes. Wing membranes are blackish-brown with paler brown strips along the forearm and metacarpals. Wings are long and narrow. The upper surface of the tail membrane is densely furred. Ears are short and rounded with a dark brown or black margin, and the tragus is short and broad. The calcar (ankle spur) has a narrow keel (tail flap).

Roost sites are usually in tree foliage 10 to 16 feet above the ground, with dense foliage above and open flying room below, often at the edge of clearings. Males roost solitarily. In Saskatchewan, reproductive females roosted on the south (especially southeast) side of white spruce trees, where wind speed was reduced.

Hoary bats are relatively fast fliers with limited maneuverability that tend to favor open areas for foraging. They feed chiefly on large moths and to a lesser extent on other insects.

Hoary bats roost in the open foliage of deciduous and coniferous trees. Unlike most bat species that aggregate in maternity colonies, females with young roost solitarily and select trees that provide shelter from wind, stable sunlight exposure, and are near a clearing.

Females typically give birth to one litter of twins in May and June, although up to four pups have been documented. Young are slow to develop and are capable of sustained flight at about five weeks of age. However, they remain with their mothers for several weeks after they begin flying.

Hoary bats are the most widely distributed bat species in North America and are found throughout Washington in forested areas with associated clearings, from sea level to at least 5300 feet. They occur in the Columbia Basin if trees are available and sometimes in arid steppe during migration. Hoary bats are resident in summer and considered to be a migratory species.

In Washington, migrating individuals have been documented in spring and fall; however a few records document presence in winter. Winter range is unknown, but presumed to be located in southern California and Mexico.

*NOTE: In general the CCVA methodology does not include human responses to climate change in sensitivity rankings. However because wind energy development is a direct and expanding response, and has an outsized impact on this species, it is included here. Without wind energy development as a factor, sensitivity would be LOW. Hoary bats are highly migratory. Collisions with wind turbines are a major mortality source for migrating individuals, thus the expansion of wind energy facilities in response to climate change will likely have a strongly negative impact on this species. Additionally, the hoary bat displays low physiological sensitivity with a generalist's diet and a broad geographic distribution in both coniferous and deciduous forests across a wide temperature gradient from 0 to 22°C at elevations from 0 to 1,620 m in the Pacific Northwest. Hoary bats are probably sensitive to the structural changes in forests caused by logging, fire, and increased insect outbreaks, which would reduce roosting and possibly foraging opportunities. Thus, altered forest fire regimes associated with climate change could degrade or eliminate roosting habitat on a local scale. Also, warmer, drier conditions could affect insect availability and reduce drinking sources for the bats, which could affect survival and reproductive output. Large numbers of individuals migrate through the Columbia Basin, thus hotter, drier conditions in this region could negatively affect the migration behavior of a significant portion of the population passing through Washington.