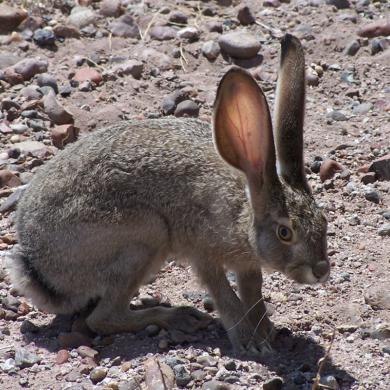 The population size of black-tailed jackrabbits in Washington is low. This species is vulnerable to loss of habitat connectivity from all four major connectivity threats: clearing and vegetation removal, development, roads and traffic, and the presence of people and domestic animals. Additionally, they are at considerable risk for increased mortality from vehicle traffic, persecution, and harassment by pets. Population monitoring is a challenge as no reliable census method exists for all population levels.

An adult black-tailed jackrabbit is approximately 24 inches long and weighs between 3 and 6 pounds.

The black-tailed jackrabbit is one of three species of hare in Washington. The other two are the white-tailed jackrabbit and snowshoe hare. Hares differ from rabbits in that young are born fully furred with their eyes open, and they can hop within hours of their birth.

The rabbit's diet varies seasonally, consisting of a higher percentage of shrubs in winter, “forbs” (non-woody flowering plants) in spring, and mostly grasses with almost no shrub ingestion in summer.

Black-tailed jackrabbits produce about 10 to 12 young annually, giving birth to multiple litters during a three-month breeding season. Only 3.5 to 9 percent survive to 1 year of age.

The black-tailed jackrabbit is the most common jackrabbit in the western U.S. Its range extends from southern-central Washington to South Dakota and southward into Baja California and well into south-central Mexico. They also have been successfully introduced into various eastern states.

Black-tailed jackrabbits were not present in Washington in the early 19th century. They first appeared in Washington in Walla Walla County around 1870. They spread north to the Snake River, and beyond it when the Snake River froze over around 1908. They spread across Benton County after the Columbia River froze in 1920. Black-tailed jackrabbits had occupied most of the Columbia Basin by 1930.

The black-tailed jackrabbit occupies habitats with a wide temperature range and minimal moisture levels (e.g., shrub-steppe, grassland, desert), with presence of some shrub cover being an important habitat feature. This species is highly capable of thermoregulating and conserving water. Because of these traits, black-tailed jackrabbits are not expected to undergo a significant reduction in overall geographic range due to climate change. However, this species is sensitive to some disturbance regimes, such as wildfire, which can remove shrubby vegetation that provides thermal, protective, and nesting cover and food plants. Warmer temperatures and changes in precipitation are projected to occur in Washington’s Columbia Basin, which will likely lead to more frequent and intense fires. These will eliminate or reduce important sagebrush habitat for jackrabbits and cause increases in cheatgrass and other invasive plants that have reduced forage value.