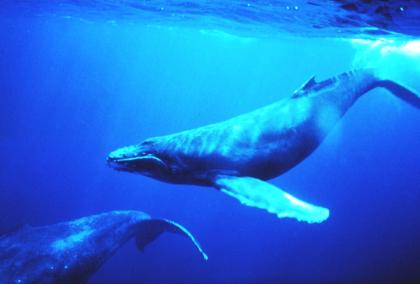 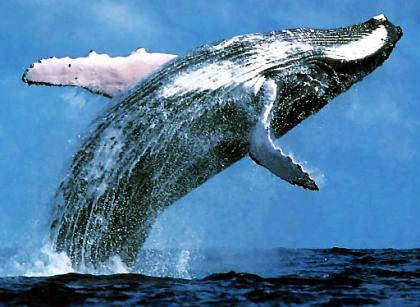 Abundance of this species along the U.S. west coast, including Washington, has steadily grown in recent decades. Humpback whales in the North Pacific remain vulnerable to a number of threats, including entanglement in fishing gear and marine debris, ship strikes, human-generated marine sound, the effects of climate change, and for the Central America DPS, possible issues related to small population size.

The humpback whale is a large baleen whale. This species can weigh up to 40 tons and reach lengths of 60 feet. They are generally dark gray to black on their back and sides and white on the throat, belly, and sides. Their pectoral fins are the longest of any cetacean, roughly a third of the total body length.

Feeding activity in the North Pacific occurs from May to December. Prey mainly includes small schooling fishes and krill, which are caught at the surface or while submerged.

Humpbacks are in the rorqual family, characterized by their expandable throat pleats and baleen plates. They expand the pleats to capture large quantities of sea water, then filter the water back out through the baleen plates while retaining their prey.

Humpback whales mate and calve at wintering grounds but do not feed. Mating behavior includes aggressive displays and male vocalizations known as singing that can last for 10 to 20 minutes and be repeated for hours at a time. Gestation lasts 11 to 12 months. Most adult females breed every two to three years. The lifespan of this species averages about 80 years.

Humpback whales travel alone or in small groups of up to 10 to 15 whales.

Humpback whale distribution encompasses the world's oceans from the tropics to higher latitudes.

Like other large whales, humpback whales were heavily exploited worldwide by the whaling industry, including in Washington. Populations in the North Pacific were roughly estimated at 15,000 animals prior to commercial harvest.  By the time the species received global protection in 1966, North Pacific populations were severely depleted, with estimates of only 1,200 to 1,400 individuals remaining.  Since that time, these populations have rebounded to an estimated 16,000 to 21,000 animals, although some stocks have recovered more successfully than others.

Most humpbacks occur off Washington from July to September. They were once common in the Salish Sea until the early 1900s but were decimated by hunting and remain rare visitors.

Humpback whales migrate long distances and occupy a broad range of ocean conditions, thus they are unlikely to have high physiological sensitivity to changes in ocean conditions. However, they demonstrate increased sensitivity due to potential declines in preferred food sources, such as small krill like euphausiids, which may result from increasing ocean acidity, increasing ocean temperatures, and other changing oceanographic patterns. Humpback whale populations occur in areas with high euphausiid production, thus any changes or declines in this food source could have negative impacts on whale reproductive success and survival. It is unclear how climate change may affect humpback whales along the west coast of North America during migration or on their tropical and subtropical Pacific calving grounds, when feeding does not occur. As marine mammal distributions shift in response to climate change, there is potential for changes in the overlap of species, which could increase the exposure of some species to novel diseases and parasites.

Humpback whales have been listed as a state endangered species in Washington since 1981. In 2016, the National Marine Fisheries Service revised the federal Endangered Species Act listing for the humpback whale to identify 14 Distinct Population Segments (DPSs) worldwide, three of which visit Washington's waters. These include (1) the Mexico DPS, which comprises the largest percentage (72 percent) of humpback whales present in the state and is federally threatened, (2) the Hawaii DPS, which comprises about 19 percent of Washington's humpbacks and is not federally listed, and (3) the Central America DPS, which contributes the fewest animals (8 percent) and is federally endangered.

Critical habitat was designated for the Central America and Mexico DPSs of humpback whales in 2021 and includes much of coastal Washington and the Strait of Juan de Fuca.