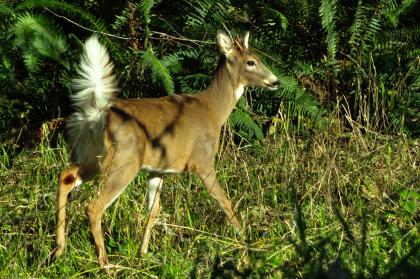 This westernmost subspecies of white-tailed deer exists in small, isolated populations, rendering it vulnerable to such factors as disease and stochastic events. Continued habitat degradation will impede recovery by further fragmenting their existing habitat. This species also will be greatly affected by climate change due to sea level rise that will reduce the tidally influenced island and lowland habitats that the deer inhabit.

Columbian white-tailed deer historically preferred upland prairie edge and deciduous woodland habitat types below the Douglas-fir (Pseudotsuga menziesii) zone. Much of this upland habitat has been lost to past and modern-day land use activities (such as agriculture and urbanization). This has relegated them to inhabit fragmented and suboptimal pockets of lowland and floodplain habitat, which is much wetter and flood-prone than their historical habitat.

Columbian white-tailed deer have somewhat adapted to these lower elevation floodplains. Within these areas they have an affinity for more open deciduous forested habitat. They also use savanna, park-like forest, and open grasslands as habitat.

The diet of this deer consists of grasses, forbs, and browse.

Breeding season takes place from mid-September until late-February. The rut (a time period of sexual activity in males) begins the first week of November and reaches its peak by about the second week of November. .Adult females give birth to two fawns per year on average. Peak fawning occurs around June, and fawns remain with their mother until just before the next fawning season when their mothers depart to give birth to the next generation.

Columbian white-tailed deer is endemic to the Pacific Northwest and is the westernmost subspecies of white-tailed deer. The Columbia River population is believed to have originally occurred in both lowland riparian and upland prairie-deciduous forested habitat in the Columbia and Willamette river valleys of Washington and Oregon. The range of the subspecies also extended along a contiguous area into Oregon as far south as Grants Pass.

The current range has been reduced to two isolated populations, one of which is confined to Douglas County, Oregon. The other population is restricted to islands and the adjacent mainland along the lower Columbia River in Clark, Cowlitz, and Wahkiakum counties in Washington, and Clatsop, Columbia, and Multnomah counties in Oregon. 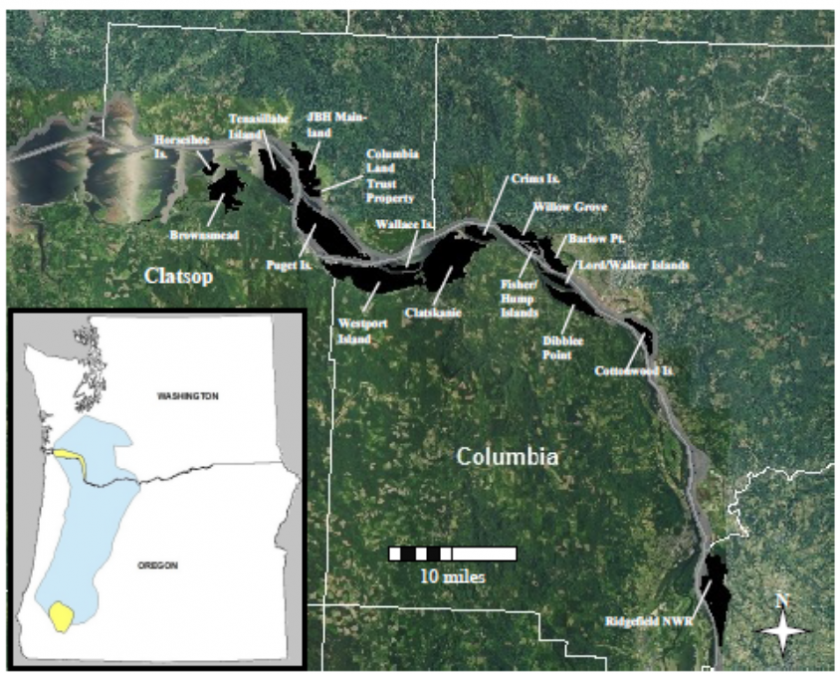 For a map reflecting this species’ conservation status and other species’ information, check out NatureServe Explorer.

The riparian habitats, bottomlands, and tidelands that Columbian white-tailed deer occupy are vulnerable to periodic major flooding events. Climate change projections in the lower Columbia River show that its effects on flood frequency and intensity could be significant. Climate change forecasts show sea levels that could rise by almost a foot by 2050. This would almost certainly lead to severe recurring floods in tidally influenced parts of the Columbia River, which in time could undermine the integrity of dikes. There is significant risk to Columbian white-tailed deer, particularly from an increased probability of habitat loss in low-lying riparian areas in the face of sea level rise. Sea level rise could also increase groundwater tables, which could influence forage composition and availability.

Columbian white-tailed deer found in southwest Washington are a protected species and are not legal to hunt.

White-tailed deer found east of the Cascade crest are managed as game animals; for current rules, be sure to check current big game hunting regulations.

Partners have carried out activities to help bolster this population, including habitat protection and restoration, predator control, and translocating deer to enhance their numbers and expand their geographic range.