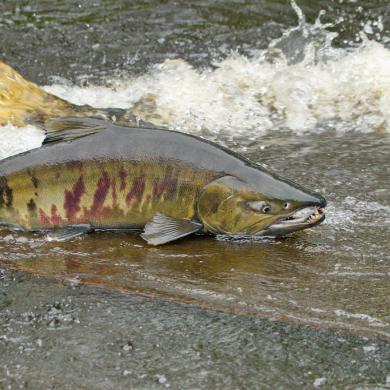 Washington State is near the southern extent of the geographic range for chum salmon, which suggests they may be sensitive to increases in water temperature (freshwater and ocean). Chum salmon incubate embryos in freshwater, but juveniles migrate to estuaries as age-zeros, typically during the spring; the spawning migrations of adult fish typically occur in early fall. Thus chum salmon may be sensitive to lower summer flows during adult migration to spawning areas. Altered freshwater thermal regimes could affect chum salmon by altering their phenology and potentially creating mismatch between arrival in estuaries and the timing of ideal ecological conditions in estuarine habitats. Chum salmon will likely be most sensitive to changes in marine thermal regimes. In general, Pacific salmon survival is positively related to sea surface temperatures (SST) at the northern extent of their distribution, and negatively related at the southern extent. However, recent evidence suggests that chum salmon may be less sensitive to SST at the southern extent of their range compared with pink and sockeye. Chum salmon embryos are vulnerable to flood events that can scour redds or bury them in silt. Chum may be vulnerable to altered flow regimes that include increased flood severity, particularly in watersheds where land use has enhanced stream flashiness.