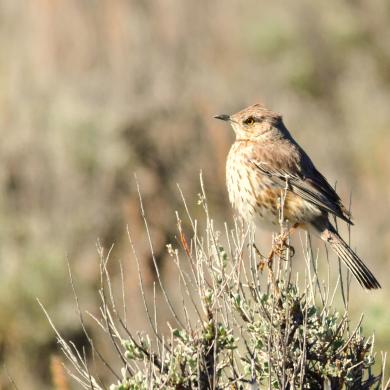 This medium-sized songbird is distinguished from other thrashers by its smaller size (8 to 9 inches), short and straight bill, and relatively short tail. Male and female are similar in appearance. The upper body is drab, brownish-gray with slightly darker feathers forming indistinct streaks, particularly on the crown. The sage thrasher is the only thrasher species that breeds in Washington. The thrasher often sings melodious, complex songs from atop tall shrubs.

Sage thrashers are generally dependent on large patches and expanses of sagebrush for breeding, but will use small fragments of sagebrush among agricultural fields. This species does not use other habitats for foraging or nesting, but sometimes uses other habitats, such as riparian areas, during dispersal and migration.

Sage thrashers typically forage on the ground. During migration and on the wintering areas, this species’ diet includes arthropods, fruits, and can include mistletoe. In its breeding area, this species’ diet consists of insects — a large portion of that diet contains ants and ground beetles.

In the shrubsteppe, there can be extreme daily fluctuations in temperature. Sage thrashers nest beneath shrubs or on the ground and often orient their nest entrances eastward to capture solar heat in the cold mornings and to shade the eggs in the hot afternoons. Sage thrashers may raise two broods annually.

This species is found throughout the Columbia Basin, primarily in areas with a substantial amount of sage. In those limited areas the species is a common breeder. Sage thrashers are not present in the Methow Valley and are locally distributed and uncommon in Okanogan Valley. From 1966 to 2013, U.S. Geological Survey - Breeding Bird Survey data indicated downward trends at the scale of the Great Basin and individual states (Idaho, Nevada, Oregon, and Utah), although the trend in Washington was stable, where reliability was moderate compared to high reliability in all other states and the province. In the period of 2003 to 2013, the trend was stable in all states noted above and the Great Basin. The size of Washington’s breeding population is unknown.