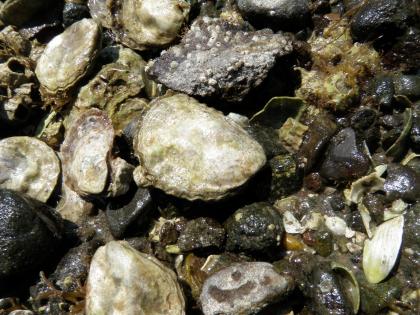 The Olympia oyster (Ostrea lurida Carpenter 1864) is Washington's only native oyster. It currently exists throughout almost the entirety of its historic (circa 1850) range in Puget Sound, but its overall overall abundance has diminished since that time.

Exploitation of  rich intertidal Olympia oyster deposits from 1850 to the early 1900s resulted in near extirpation of large natural beds, both by harvest and conversion to intensive cultivation. Both harvest and cultivation eliminated decades of natural shell accumulation and living oysters that formed oyster beds, some up to a foot thick in depth. The resulting conditions for wild stocks of native oysters were further exacerbated  in the latter portion of commercial exploitation by additional stressors: further habitat alterations, water pollution, invasive predators, and alternative uses and values for historic habitat footprints ( i.e. aquaculture and eelgrass). Shoreline and watershed developments further diminished the presence of natural beds and the overall abundance of the oyster in Puget Sound,--along with restricting its ability to naturally rebuild beds and abundances.

Since 1997, Olympia oysters have been listed by the Washington Department of Fish and Wildlife (WDFW) as a State Candidate species. State Candidate species are those that WDFW may review for possible future listing as State Endangered, Threatened, or Sensitive species. The Olympia oyster is also included in WDFW's Priority Habitats and Species (PHS) List, a catalog of habitats and species considered a priority for conservation and management. Puget Sound wild stocks of O. lurida are not presently exploited for commercial or recreational harvest, although they may be subject to treaty tribe ceremonial and subsistence harvest. For management purposes, O. lurida is statutorily classified by WDFW as “shellfish” (WAC 220-12-020) and is passively protected from recreational harvest on public tidelands by a rule that prohibits recreational harvest of any oyster less than 2.5 inches in shell size (WAC 220-56-310). Annual Bivalve Management Plans between the State and Puget Sound treaty Tribes also indirectly protect native oysters on public tidelands from tribal commercial harvest with the same 2.5 inches minimum shell size restriction.

Restoration efforts in Puget Sound were initiated following the development of WDFW's 1998 Olympia Oyster Stock Rebuilding Plan (Cook et al. 1998). The key actions cited in the 1998 Rebuilding Plan included development of survey methods, population inventories, natural restoration techniques, site selection criteria, genetic integrity investigations, water quality improvement, and habitat protection. The 1998 Rebuilding Plan was not funded as a WDFW project, however, and many aspects of the plan have been undertaken by the non-profit Puget Sound Restoration Fund (PSRF). Native oyster restoration in Puget Sound has been a collaborative partnership effort facilitated by PSRF and involving WDFW and other government agencies, treaty tribes, shellfish growers,  non-profit organizations including the NW Straits Commission, universities, private tideland owners, and volunteers. This work has led to many successes in Olympia oyster restoration and contributed much to the understanding of the species, its place in the Puget Sound ecosystem, and how to advance its long-term recovery.

Olympia oysters are likely to be sensitive to a number of climate factors, including declines in salinity, oxygen, and pH. Olympia oysters are sensitive to low salinity levels, and potential increased precipitation (particularly during winter and spring) can lead to lower salinity levels and potential juvenile mortality, as juveniles have a more sensitive salinity threshold. Additionally, increases in extent and time of hypoxic conditions could limit oyster growth. Predicted declines in ocean pH in Washington are also likely to lead to decreases in growth, weight, and metamorphic success of oyster larvae, which could also trigger increased mortality at later life stages. The effects of acidification on oyster larvae could be more severe if low pH conditions are coupled with decreases in phytoplankton food availability.

WDFW has identified 19 Priority Sites at which to focus Olympia oyster restoration, based on historical occurrence and existing habitat. WDFW recommends a focused restoration strategy at 19 sites within Puget Sound by 2022. If successful, this strategy will result in the re-establishment of self-sustaining, large-scale, dense native oyster assemblages able to function as source populations. This strategy is recommended for both the biological conservation of the species and as a foundation for continued rebuilding of the species by natural or artificial means.

The primary objectives of this restoration strategy are the biological conservation of the species and its associated habitat. Those objectives are achieved by re-establishing, rebuilding and enhancing natural native oyster assemblages, ensuring the species' long-term persistence in the face of changing marine and environmental conditions, and the competing uses of Puget Sound marine waters and tidelands.