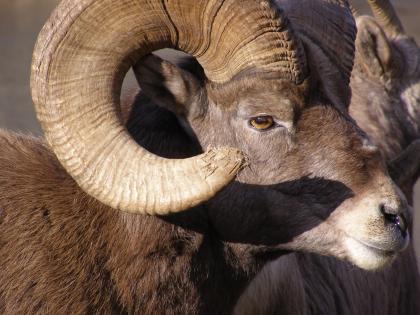 Bighorn sheep are the largest wild sheep in North America. The Rocky Mountain bighorn (O. c. canadensis) is the only subspecies found in the Pacific Northwest.

Bighorns have light brown coats and horns that indicate their age. They have split hooves to help with balance and rough hoof bottoms, allowing them to move easily across rugged terrain. Bighorns have excellent eyesight, which helps them jump and find narrow mountain footholds.

Male bighorns, known as rams, have large brown horns that curl back over their ears and spiral up past their cheeks. A ram’s horns won’t have a full curl until they are seven or eight years old. In addition to horns, rams have double-layered skulls reinforced with struts of bone to protect them.  Large rams can weigh over 250 pounds, with the horns alone weighing 30 pounds.  Horn size can be a symbol of dominance among rams.

Female bighorns, ewes, are smaller than rams and their horns average 9 to 12 inches with a slight curve backwards. An ewe’s average lifespan is 10 to 14 years, while rams typically live 9 to 12 years. Bighorns less than one year of age are referred to as lambs.

Bighorn sheep are social animals, forming herds of over 100, though they are often found in smaller groups. Mature rams usually live apart from ewes and lambs for most of the year in “bachelor herds”.

Diet
Bighorn Sheep are herbivores. They primarily eat grasses and forbs, but will browse numerous shrubs like elderberry, willow, bitterbrush and young trees. Bighorns have a complex 9-stage digestive process that allows them to maximize removal of nutrients from food of marginal quality. Generally, bighorn sheep are opportunistic feeders that adapt their diet to the forage available.

Reproduction
The bighorn breeding season, or rut, generally extends from October to January. In each band of rams there is a dominance order, and the higher-ranking rams do most of the breeding. Rather than defending territory, rams engage in battles over mating access to ewes. Bighorn sheep are known for their head-to-head combat. Clashes between rivals can last for a full day, with rams smashing into each other repeatedly at speeds of up to 20 miles per hour.

Bighorn sheep have a 6-month gestation period and most ewes give birth to one lamb per year.  The lambing season in Washington generally occurs between early April and June. Prior to giving birth, ewes isolate themselves in steep rocky areas. Newborn lambs weigh 8 to 10 pounds and can walk within hours after birth but are dependent upon steep terrain for protection from predators. Lambs nurse for 4 to 6 months and follow their mothers for the first year of life to learn their home range and behavior.

Bighorn inhabit alpine meadows, grassy mountain slopes, canyonlands, and foothill country near rugged rocky cliffs and bluffs. The Washington Department of Fish and Wildlife formally recognizes and manages 17 herds across central and eastern portions of Washington.  They can often be seen from highways and roadways in the canyon country of southeast Washington and the eastern slopes of the Cascades.

Bighorn sheep are adapted to open arid and moderately arid environments, and therefore may not be greatly affected by projected warmer and drier conditions in much of their eastern Washington range. Drier conditions could, however, reduce the quality of forage plants for this species. Increased occurrence of wildfires may benefit bighorns by improving forage conditions, moderating tree encroachment into their open habitats, and reducing predator risk.

Hunting licenses for bighorns do not have to be purchased unless you are selected for a special hunt permit.

Money generated from the annual auction and raffle permits are used directly for bighorn research, reintroductions, and management.

At the beginning of the 1800s, there were an estimated 1.5 to 2 million bighorn sheep in North America. Today less than 70,000 remain. Overhunting, habitat loss and, most significantly, the spread of the pneumonia pathogen from domestic sheep to wild herds led to the extirpation of bighorns from Washington by the mid-1920s. It is thanks to reintroduction efforts by hunting and conservation organizations and state game managers that our state once again has this native sheep, but the threat of disease still looms over the long-term success of the bighorn restoration efforts. The Washington Department of Fish and Wildlife 2015-2021 Game Management Plan has more information on bighorn conservation.