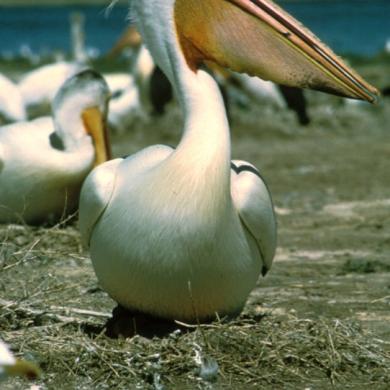 The American white pelican population is moderate but increasing. In Washington, they are very local breeders in the eastern part of the state (Walla Walla County) and an uncommon visitor on the western side.

The American white pelican is about 5 feet in length and has a wingspan of about 9 feet across. They are white overall except for having black outer secondary and primary feathers on their wings. Adults during breeding season have a bright orange bill and a yellow crest. Immature birds are white but have mottling on their wings.

American white pelicans are large, highly gregarious migratory birds that nest in colonies. This species mostly spends the winter along coastal areas in bays, inlets, and estuaries that contain exposed places, such as sand islands, for loafing and roosting. These areas ideally will be near foraging sites. The birds will also spend time on inland freshwater reservoirs, lakes, or rivers.

Foraging areas may be 30 miles or more from breeding sites, and include the shallows of lakes, rivers, and marshes. Pelican prey includes fish (such as carp, suckers, and chubs, but also including commercially important species in some areas), amphibians, and crustaceans.

American white pelicans nest on isolated islands in freshwater systems that are relatively free of disturbance by humans and mammalian predators. These islands can be permanent or ephemeral. Females typically breed at age three and lay an average of two eggs, but most pairs fledge only one young. Nesting pelicans are highly susceptible to disturbance and females rarely lay a second clutch if the first clutch is lost.

Young are cared for by both parents for three to four weeks, then join other young within the colony and fledge at 9 to 10 weeks old.

Natural predators of eggs and chicks include gulls, coyotes, large corvids, and other mammals.

American white pelicans breed in the western and central Canadian provinces and in the north-central and western United States. They overwinter from central California to southern Arizona, Mexico, and northern Central America, as well as Texas to Florida.

In Washington, they are very local breeders in the eastern part of the state and a rare visitor on the western side. American white pelicans did not breed in Washington from about 1930 to 1995. However, there is a known breeding colony of around 2,500 to 3,000 pairs on the Columbia River's Badger Island in Walla Walla County.

For maps of worldwide distribution and conservation status of the American white pelican, check out NatureServe Explorer and the International Union for the Conservation of Nature Red List.

American white pelicans are sensitive to climate change through more variable spring weather in their breeding areas. Earlier migration of adults in the upper Plains has resulted in young chicks exposed to more variable weather, and higher frequency of breeding failures due to high mortality events during cold, wet weather. Increases in droughts could result in lower water levels allowing predator access to nesting islands potentially eliminating some nesting sites, although this species is adapted to take advantage of changing situations; anomalous precipitation events could cause occasional flooding of colonies. Higher temperatures increase frequency of mortality events from Type C botulism.

See Climate vulnerability section for information about the threats posed by climate change to this species.