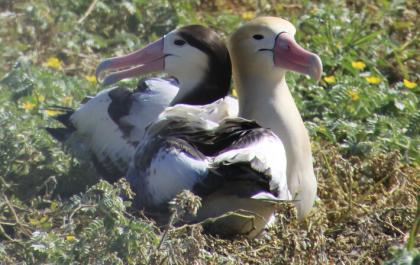 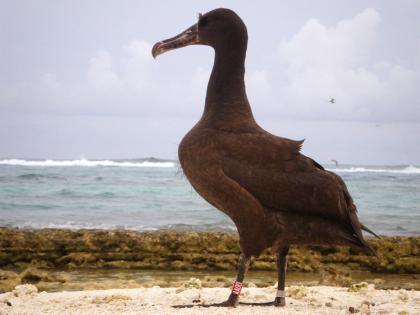 The short-tailed albatross is a rare visitor to Washington waters. It breeds on islands off Japan and in Hawaii. Its population is currently around 7300 individuals and growing. The main population is vulnerable due to about 85 percent of nesting pairs concentrated on a single island. Fishing vessels and fishing tactics are also threats.

The short-tailed albatross is the largest pelagic seabird in the North Pacific Ocean, with a wingspan of 7 to 7.5 feet. These birds have a noticeably large pink bill. Adults have a pale-yellowish head, and are mostly white. Juveniles in their first year have dark brown plumage; subadults have dark plumage on top of their head, neck and back but their underside is white with brown mottling.

The short-tailed albatross first breeds at 5 to 9 years of age. Pairs mate for life, and lifespan is about 45 years.

During breeding, adults forage primarily in the upwelling zones off northern Japan. During northern summers, mostly adult birds follow trade winds to the edges of the continental shelves from China north to the Aleutian Islands and Bering Strait. Immature birds (less than three years) largely occur at the eastern Pacific continental shelf from the Alaskan gulf south to southern California.

Recolonization efforts began in the late 1970s, and the population is now growing at an average rate of 8.9 percent per year. However, short-tailed albatross are still vulnerable because the main breeding colony, which supports about 84 percent of nesting pairs, is located on an unstable volcanic island.

This species was known to have occurred offshore of Washington and British Columbia, where they were considered common in the mid-19th to early 20th century.

For a range-wide map of the distribution and conservation status of this species, check out NatureServe Explorer.

Although short-tailed albatross are unlikely to have physiological sensitivity to climate change and their breeding habitat is also unlikely to be affected by climate change, their sensitivity will be increased by potential shifts in prey availability. Given that albatross primarily forage in areas with strong upwelling and high oceanic productivity along the continental shelf, potential shifts in ocean circulation could limit the availability of prey (e.g., squid, crustaceans, flying fish). Additionally, potential northward shifts of primary prey species like squid could result in a northward shift in albatross populations.

Once thought to be the most abundant albatross species in the North Pacific, this species was hunted to near-extinction by 1949. Exact populations were not known, but between 1885 and 1903 it is estimated that more than five million birds were harvested from one island colony alone (Torishima, Japan). The short-tailed albatross is designated as a “National Monument” in Japan, and regulations now prohibit harvest of this species.