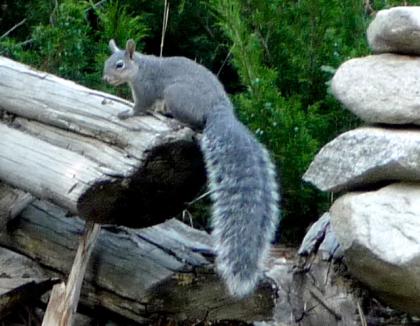 Western gray squirrels are a protected species in Washington and cannot be hunted, trapped, or killed (WAC 220-200-100).

The Washington Department of Fish and Wildlife (WDFW) maintains records on the distribution of western gray squirrels in Washington. The public’s assistance in reporting sightings of this species is appreciated.

The western gray squirrel is the largest tree squirrel native to the Pacific Northwest. They are steel gray on the back, with contrasting white on the belly and throat, resulting in the name, "silver gray squirrel" in some parts of their range. They are distinguished by their very long and bushy tails that are primarily gray with white-frosted outer edges. They also have prominent ears, which can be reddish-brown on the back in winter. This occasional small patch of brown is only visible upon close inspection and is the only part of the squirrel that may have any brown.

Western gray squirrels are most frequently associated with pine trees, which provide nesting cover and seeds for food, and oak trees, which provide natal den sites and acorns for food. In Washington, they also use stands of Douglas fir trees when a component of oak or pine is present. The squirrels require mature stands of trees with sufficient canopy cover to provide secure nest sites and allow for traveling about in trees. They also need a diverse selection of vegetation to provide a multitude of food resources.

Western gray squirrels mate from early winter to late spring, with one litter of two to four young appearing from March to June. After about 30 days of age, the young are fully furred and make short trips out of the nest. At about 60 days of age, they eat solid foods and venture to the ground.

At about three months of age, juvenile squirrels are on their own, sometimes remaining close to the nest until their parents’ next breeding period.

All tree squirrels create nursery nests in hollow trees, abandoned woodpecker cavities, and similar hollows. Where these are unavailable, they will build spherical or cup-shaped nests in trees, attics, and nest boxes. Western gray squirrel nests are large and often clustered in dry oak / conifer forests.

Occupied nests may have fresh leaves, green conifer boughs, or lichen on top. Nesting frequently occurs in either large conifers (especially ponderosa pine and Douglas-fir) or oaks averaging greater than 16 inches in diameter. Most nest trees are located inside or on the edge of a forest stand and have crowns connecting with surrounding trees. Mistletoe infections are another common characteristic of nest trees.

In trees, squirrels are relatively safe, except for the occasional owl or goshawk. On the ground, large hawks and owls, domestic cats and dogs, coyotes, and bobcats catch squirrels.

Vehicles, disease, and starvation also kill squirrels. Population density varies with food supply and occurrence of disease. Most squirrels die during their first year. If they can survive the first year, they typically live three to five years.

The western gray squirrel was once common at low to mid-elevations in dry forests where oak, pine, and Douglas fir mix. It could be found in the south Puget Trough and Columbia River Gorge and on the east slope of the Cascades north to Okanogan County.

For maps of worldwide distribution and conservation status of this species, check out NatureServe Explorer and the International Union for the Conservation of Nature Red List.

Western gray squirrels are susceptible to altered fire regimes that degrade forest quality for extended periods of time. For example, the major wildfires that occurred in Okanogan and Chelan counties in 2014 and 2015 destroyed large amounts of western gray squirrel habitat and also caused direct mortality to the squirrels. Smaller, but still important fires have also burned habitat for the species in Klickitat and Yakima counties in recent years. Additionally, western gray squirrels are sensitive to disease outbreaks (e.g., mange, Western equine encephalitis virus), which could become more frequent with warmer temperatures. Despite these concerns, one recent study has projected that some forest types used by the squirrels will expand under warmer, drier conditions, which may benefit the species in Washington.

Western gray squirrels are a protected species in Washington and cannot be hunted, trapped, or killed (WAC 220-200-100).

The western gray squirrel was added to Washington’s list of state threatened species in 1993 when surveys indicated a decline in its geographical distribution.

See the Climate vulnerability section above for information about the threats posed to western gray squirrel by climate change.