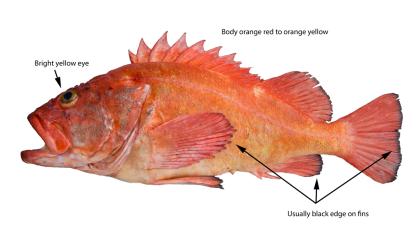 Among the largest and longest living rockfish species, Yelloweye are a distinctive part of the rockfish population in Washington waters. Adults have a red-orange color to their body and this, combined with their namesake yellow/gold eye, is typically the best way to identify one. Larger individuals may also have a rough textured ridge along their head between the eyes.

Juveniles have a particularly distinctive appearance, so much so that they were once thought to be a different species. Juveniles up to subadults (when they begin to lose them) have two horizontal white lines, one either side of the lateral line. The body color is often a more vibrant red than the adults, which tend to have a more dulled red or orange color. The fin tips of these younger fish can be black or white and there can often be a white bar running vertically along the base of the caudal peduncle fin where it meets the body. There may also be white patches along the dorsal side of the fish.

In addition to their long-life expectancy, these fish take longer to reach maturity than many other species. In British Columbia, 50% of fish in a study were mature only by the time they were 19-22 years old. This is a contributing factor to the difficulty of recovering this species’ population in parts of Washington State.

Yelloweye Rockfish can be found from Umnak Island, AK to northern Baja California. While present, their numbers are poor in Puget Sound where they were listed under the Endangered Species Act as threatened in 2010 and remain there as of 2021.

These are deep water fish that range in depth from 11 m (36 ft) to 549 m (1,800 ft). Typically, it is only the juveniles that are to be found in the shallower part of that range, Yelloweye are more typically found from 91 m (300 ft) – 180 m (590 ft). While some juveniles can be found in shallower areas in and around algae, the primary habitat for both older juveniles and adults alike are deep areas of high relief, highly complex rock. Rock walls with glass or cloud sponges are also important habitat for juvenile Yelloweye.

The main sensitivity of yelloweye rockfish to climate change is likely to stem from changes to their prey base. Warmer ocean conditions could lead to decreases in prey (e.g., small fish, crabs, gastropods) for both juveniles and adults, prompting decreases in adult fecundity and growth and juvenile survival. Additionally, nearshore habitat loss due to sea level rise could impact juvenile survival, as juveniles tend to use nearshore habitat as nursery and foraging area. Deepwater coral habitat, which is particularly preferred by yelloweye rockfish, may also decrease due to acidification, further reducing available habitat. Decreased oxygen levels may have direct physiological effects on yelloweye rockfish, leading to higher levels of mortality across various life stages. Due to their long life cycles and generation times, adults may be able to persist through short term pulses of negative ocean conditions (e.g., years with warmer sea surface temperature), though conversely, their low productivity could make it difficult for populations to recover from climate-related declines.

In Puget Sound, WDFW has implemented recreational depth and area restrictions, and closed commercial fisheries that target rockfish or have a high potential to encounter the fish as bycatch. Other commercial fisheries off the Washington coast that tend to take rockfish as bycatch have also been limited in an effort to reduce rockfish mortality. Additionally, WDFW offers guidance on safely releasing rockfish to help increase their survivability.