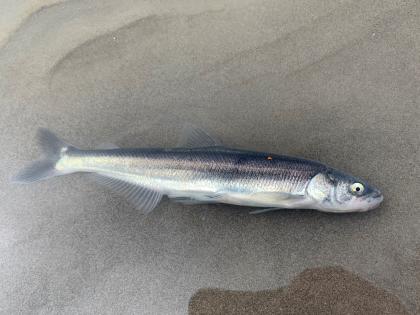 Eulachon are vulnerable to climate-driven changes in both their oceanic rearing and freshwater spawning habitat. Eulachon exhibit site fidelity to specific spawning rivers, limiting the opportunity for adults and juveniles to move in response to changing nearshore-rearing and spawning habitat conditions. Eulachon spawn prior to the spring freshet, and egg hatch is correlated with peak spring flows to facilitate emigration. Precipitation changes, reduced snowpack, and earlier snowmelt all contribute to shifts in streamflow timing and magnitude, which could alter eulachon spawning time and/or cause earlier emigration. Early emigration could contribute to oceanic prey mismatch and eulachon mortality if larvae/juveniles arrive to marine rearing habitat prior to coastal upwelling initiation, which is projected to occur later in response to warmer ocean temperatures. Warming ocean temperatures may also affect eulachon forage opportunities and marine survival by affecting the abundance and composition of copepod communities, key prey for larval eulachon. Warming ocean temperatures have also facilitated the expansion of Pacific hake, which prey upon and compete with eulachon.

This species is identified as a Species of Greatest Conservation Need (SGCN) under the State Wildlife Action Plan (SWAP). SGCN-classified species include both those with and without legal protection status under the Federal or State Endangered Species programs, as well as game species with low populations. The WDFW SWAP is part of a nationwide effort by all 50 states and five U.S. territories to develop conservation action plans for fish, wildlife and their natural habitats—identifying opportunities for species' recovery before they are imperiled and more limited.
This species is identified as a Priority Species under WDFW's Priority Habitat and Species Program. Priority species require protective measures for their survival due to their population status, sensitivity to habitat alteration, and/or recreational, commercial, or tribal importance. The PHS program is the agency's main means of sharing fish and wildlife information with local governments, landowners, and others who use it to protect priority habitats for land use planning.
Also in this section
© 2022 All rights reserved.