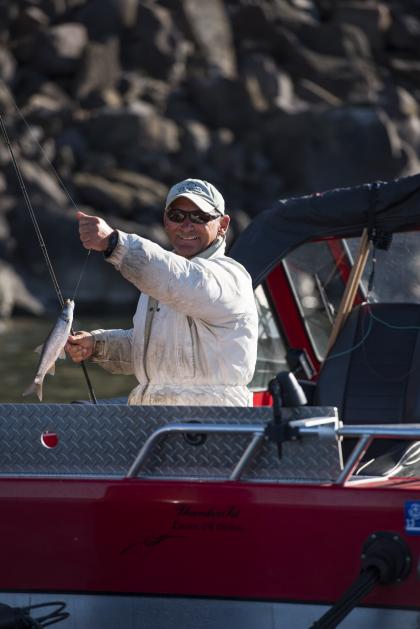 You can help save salmon and get paid to do it by going fishing! The Northern Pikeminnow Sport-Reward Fishery Program, funded by the Bonneville Power Administration (BPA), administered by the Pacific States Marine Fisheries Commission, and implemented by the Washington Department of Fish and Wildlife is in effect annually on the Columbia and Snake rivers from approximately May through September. Specific dates, times and station locations will be announced and regularly updated on the Pikeminnow website. Anglers are paid for each Northern Pikeminnow that they catch (from within program boundaries) that is 9 inches or larger in total length, and the more you catch, the higher the reward. In 2022, rewards begin at $6 each for the first 25 Northern Pikeminnow caught during the season.  Anglers are paid $8 for each fish they catch from 26-200, and $10 for every fish caught over 200 cumulatively.  Anglers are also paid $500 for each specially tagged Northern Pikeminnow!

Over the past ten years (2011-20), the top 20 anglers caught an average of 3,353 fish per angler and averaged reward payments of $27,836 each for the five-month season. The highest-paid angler in 2020 caught 5,579 fish and earned $48,501, while the all-time record harvest is 14,109 Northern Pikeminnow worth $119,341!  BPA funds the Northern Pikeminnow Sport-Reward Fishery to partially mitigate for the impact of the Federal Columbia River Hydroelectric System on salmon and steelhead.  Results indicate that the Pikeminnow Program has been successful, with over 5.2 million predatory Northern Pikeminnow removed to date by anglers participating in the Sport-Reward Fishery, and a decrease of predation on juvenile salmonids of up to 40 percent from pre-program levels. For full information on the Pikeminnow Program, including Rules and Regulation, season dates, station times and how-to catch them information, please see our website at www.pikeminnow.org