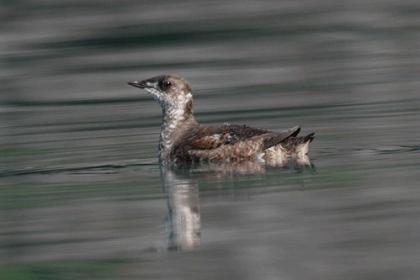 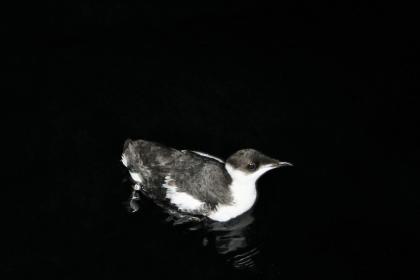 An adult marbled murrelet in non-breeding plumage on marine waters. 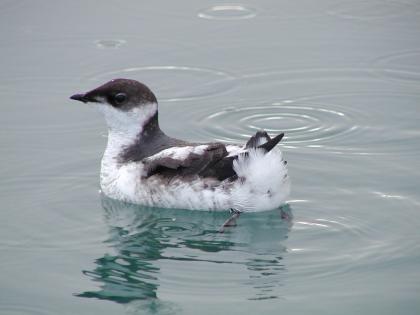 The marbled murrelet population in Washington is low and declining. Because of its breeding association with old forests, their populations have been severely affected by loss of mature and old forest habitat. Food resources in the marine environment may also influence population status.

The marbled murrelet is a small (10 inches in length), chunky seabird. Its beak is black and slender. Breeding plumage has an overall brownish ‘marbled’ look. Adult non-breeding plumage is a black crown with a white ear patch, throat and underside, black nape and back, and black wings with white scapulars (top of wing). Juvenile plumage is similar to adult non-breeding but duskier overall.

Marbled murrelets are seabirds that forage in marine waters but nest in forests. In Washington, marbled murrelets nest in mature and old-growth conifer forests, and sometimes in comparatively younger forests with residual old-growth trees. They locate their nest in a depression on a mat of moss, lichen or debris accumulations on large branches. Marbled murrelets appear to establish long-term pair bonds and fidelity to nesting areas and nest trees.

Small schooling fish (such as Pacific anchovy, Pacific herring, candlefish, and Pacific sand lance) make up most of the diet, which may include small crustaceans when fish are not abundant. Marine foraging areas are usually within 1.2 to 3 miles of shore, typically in waters less than 100 feet deep.

The marbled murrelet inhabits the nearshore marine environment in western North America. In Washington, this species is an uncommon resident. It is found in marine waters in general proximity to nesting habitat. It is most abundant in northern Puget Sound and the Strait of Juan de Fuca, and least abundant along the coast of southwestern Washington. The primary factor influencing breeding distribution is likely the availability of suitable nesting "platforms" (such as large branches) within close proximity to marine water foraging areas.

Surveys indicate highest nesting presence is on the Olympic Peninsula, the northern Cascades and in limited remaining habitat in southwest Washington. At-sea population monitoring from 2001 to 2015 indicated a 4.4% decline in the murrelet population annually, which represents a 44% reduction since 2001. The 2015 population estimate for Washington is about 7,500 birds. Sustained low juvenile recruitment has been identified as a main cause of the decline.

The main sensitivities of marbled murrelets to climate change will likely be due to potential changes in prey availability and habitat. Increasing sea surface temperatures could lead to declines in target prey abundance (e.g., herring, sand lance, crustaceans) and declines in murrelet productivity, though their ability to target multiple types of prey may help this species adapt to shifts in prey abundance. Alterations in nesting habitat, which occurs in inland mature and old growth forests, could also lead to declines in populations. Potential increased storminess and higher winds could impact nesting sites, as could drier, warmer conditions that lead to increased fires and more fragmented habitat for nesting.

Since 2000, WDFW has joined USDA Forest Service Pacific Northwest Research Station, U.S. Fish and Wildlife Service, and other state, federal and private researchers to participate in a program to estimate marbled murrelet population size and trends during the breeding season between San Francisco Bay and Washington state. This effort provides the only information available to assess population size and trends in this geographic area for this species. Learn more about this research and access progress reports on the Marine birds page. This page also includes information about other projects, including at-sea marbled murrelet research involving the U.S. Navy.

WDFW conducts survey flights over a period of several days from November through February annually to monitor the abundance, trends, and distribution of sea ducks and other marine birds, including marbled murrelets, in the Puget Sound and the Strait of Juan de Fuca (U.S. portion of the Salish Sea). Learn more about this research on the project's page.

From 2017 to 2019, WDFW, in collaboration with U.S. Fish and Wildlife Service, USDA Forest Service, and the University of Wisconsin, captured marbled murrelets on the water at night using a spotlight technique. This technique allows for capture of birds mesmerized by the light; during the day, capture would be more difficult as they normally dive or fly away well in advance of a boat’s approach. The goal of the project is to gain a better understanding of marbled murrelet diet during the non-breeding season. To reconstruct diet, murrelets were captured and a fecal sample collected if provided by the bird. Next generation sequencing of the DNA in the feces is used to determine what the murrelet was eating. It is hoped this information will help identify important components of murrelet diet and also help focus future efforts on protecting those critical food resources. Additional work is slated for 2020, with planned modifications for positioning of boats and crew to address concerns regarding COVID-19. A manuscript summarizing findings is anticipated in early 2021.