Wolves were formerly common throughout most of Washington, but declined rapidly because of trapping, poisoning, and hunting as ranching and farming by European-American settlers expanded between 1850 and 1900. By the 1930s, wolves were considered eradicated from the state. Infrequent reports of animals continued in the following decades, suggesting that individuals continued to disperse into Washington from neighboring states and British Columbia.

Wolves are protected with legal status under the federal Endangered Species Act and under state law in Washington. There have been no federal or state actions to reintroduce wolves into Washington. Wolves dispersed into eastern Washington and the North Cascades on their own from adjacent populations in Idaho, Montana, Oregon, and British Columbia.

A wolf pack with pups was confirmed in July 2008 in western Okanogan and northern Chelan counties and represented the first fully documented breeding by wolves in the state since the 1930s. Since then, the state’s wolf population has increased at an average rate of 28 percent every year, and many other wolf packs have been confirmed.

State and federal wildlife authorities continue to monitor resident wolf activity to assess population expansion across the state and learn more about habitat usage and behaviors.

Gray wolves are highly social and live in packs. The pack usually consists of a dominant breeding pair (an alpha male and alpha female), their offspring from the previous year, and new pups. Other breeding age adults may be present, but usually only one pair will breed in each pack in any given year. The pack often hunts, feeds, travels, and rests together, although they may split up from time to time to patrol their territory or search for food. The pack also shares pup-rearing responsibilities, including hunting and tending pups. Pack sizes can range widely, but a typical pack in the northern U.S. Rockies is five to 10 animals.

Few wolves live more than five years in the wild, although individuals have been known to reach 15 years of age. Research in the northern Rocky Mountain states has shown that humans cause most wolf deaths in the region. Causes include illegal killings, legal harvest, vehicle collisions, and management removals.

However, in areas such as Yellowstone National Park, where wolves are fully protected, most wolves die from natural causes, such as territorial conflicts with wolves in neighboring packs, injuries while hunting prey, starvation, or disease.

As pups grow older, they are taken from the den to a protected location known as a rendezvous site. A rendezvous site is where the pack will take young wolves before they’re able to travel and hunt with the pack. One or more rendezvous sites are used over the summer until the pups have matured.

With their large size, powerful jaws, large teeth, speed, endurance, and habit of hunting in packs, wolves are keenly adapted to hunt large prey. In the central and northern Rocky Mountains of the U.S. and Canada, wolves often prey on elk, deer, and moose. Despite their hunting abilities, the majority of wolf hunts are unsuccessful. Wolves will also scavenge carrion and eat smaller animals. In some instances, wolves have been known to kill and feed on domestic livestock and poultry, including cattle, sheep, and chickens.

Wolves are opportunistic hunters and tend to prey mainly on younger, older, and debilitated animals. This can leave prey herds with more healthy animals of prime age, thereby enhancing productivity. Wolves alone rarely influence the abundance of healthy prey populations. In some situations, such as in concert with other predators (including humans), or when prey species occupy marginal habitat, wolves may influence prey abundance. It has been theorized that wolves affect the behavior of their prey, thereby affecting vegetation patterns, occurrence of other wildlife, and other ecological processes, however, these affects vary greatly and depend on prey populations, specific landscape features, and importantly, wolf abundance.

Wolves are shy by nature and typically avoid human contact. As with all wildlife, wolves should never be fed or approached, as they could become habituated to people. Campsites and other areas of human occupation should be kept free of accessible garbage or food.

In the very rare chance of a close encounter with a wolf, people should take the same steps as with cougars and bears to avoid problems – stand tall, act aggressively, raise your voice or shout, don’t run, and slowly back away while facing the animal.

Wolves usually consider domestic dogs (Canis lupus familiaris) as territorial threats and may attack and kill them. Responsible dog owners need to keep pets safe when recreating or living in wild country. Dogs should be kept on a leash or kept close by when walking or hiking in areas with wolves.

Because wolves are listed as a state and federal endangered species, it is illegal to kill, harm, or harass them. Wolf sightings and suspected wolf depredation on domestic animals should be reported to federal or state authorities who will investigate incidents and take appropriate action to resolve problems.

Gray wolves are about twice the size of coyotes. They measure up to 6 feet in length, including tail, and about 30 inches in height at the shoulder. Female wolves weigh around 70 – 80 pounds, while males weigh around 95 – 100 pounds.

Wolves have larger and blockier muzzles than coyotes, shorter and more rounded ears, and shorter and bushier tails. Wolves vary in color, including black, white, and shades of gray and brown.

Wolf tracks are about 5 inches long by 4 inches wide, with four symmetrical toes and evident claws, and a single lobe on the front of the foot pad. Coyote tracks are similar, but about half that size, and even the largest domestic dog breeds usually have smaller tracks. The paths of wolves usually show a direct, energy efficient or purposeful route, whereas those of dogs often meander. 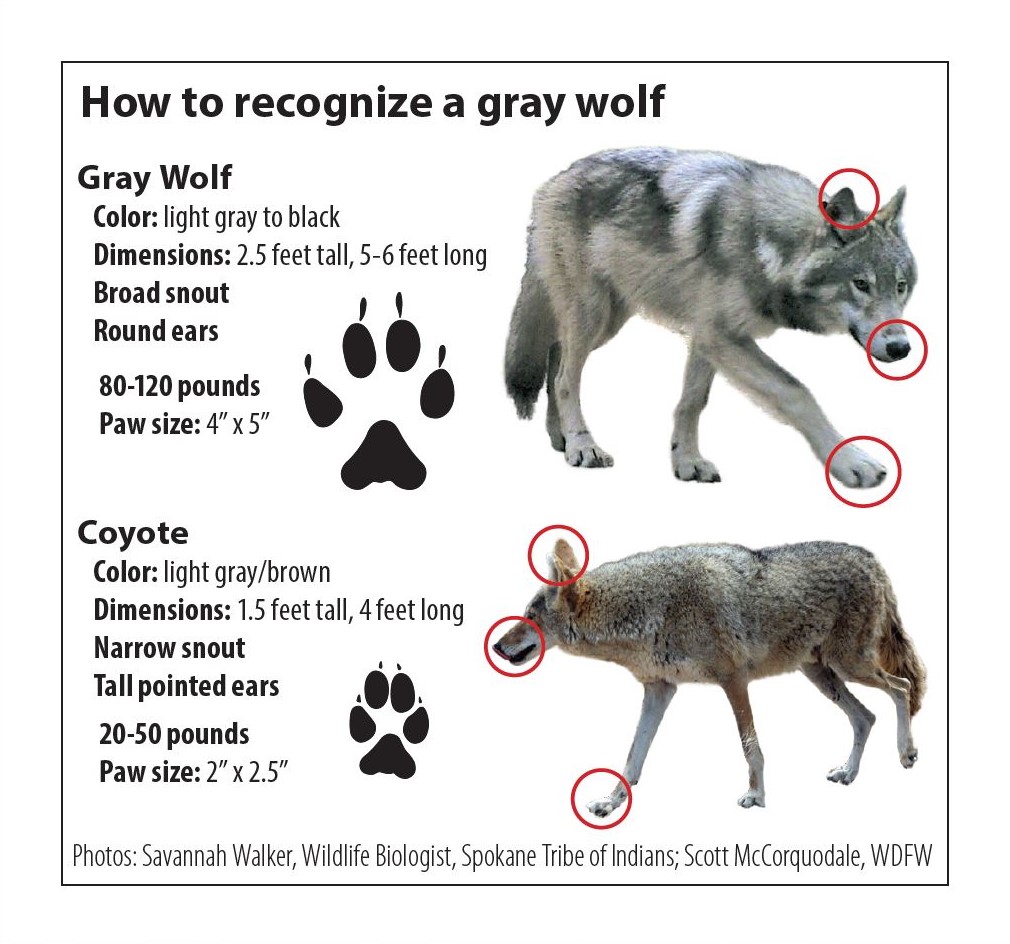 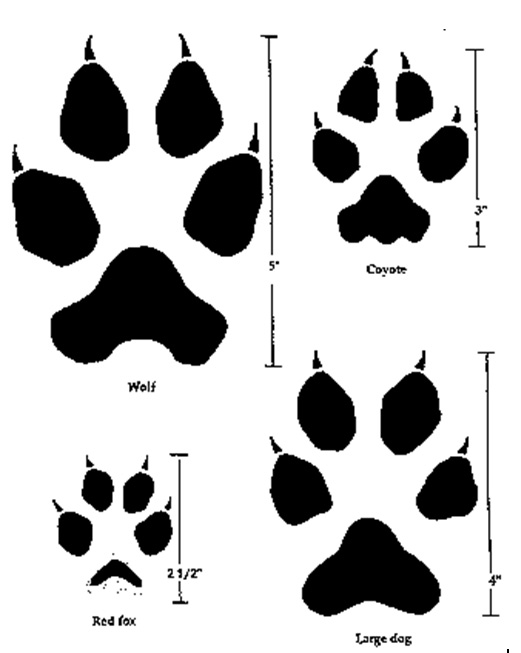 A wolf pack establishes a territory and defends it against neighboring packs. Territories usually average 140 to 400 square miles, and their size often varies from year to year. Territories are often smaller when prey is more plentiful and other packs live nearby.

Howling is a common behavior that helps pack members communicate and stay together. Howls are audible for up to five miles, and tend to be long and drawn out compared to the shorter yapping sounds made by coyotes. Wolves also growl and bark.

Most young wolves leave their birth packs when they are 2 or 3 years old to search for a mate and start a new pack of their own. Dispersing wolves usually relocate about 60 miles from their birth pack, but can travel up to 500 miles or more.

Wolves are highly adaptable and can live in a variety of habitats if sufficient prey is available. In the northwestern states and western Canada, wolves are most common in relatively flat forested areas, rolling hills, or open spaces such as river valleys and basins, where prey animals are easier to chase and catch.

Wolf populations fare best in areas away from humans and their activities. These tend to be remote, relatively unpopulated areas with extensive public lands, few roads, and few or no livestock.

The presence of wolves can benefit natural plant and animal communities by preventing the overpopulation of prey and helping maintain the natural occurrence of certain plant and wildlife species.

Normal wolf behavior can easily be confused as habituation (becoming too comfortable with humans).

Wolves are often described as shy and fearful of humans. Consequently, when a person sees a wolf pup lying in the middle of a dirt road or an adult wolf trails a person through the woods, they describe the wolf as exhibiting odd behavior, or “habituated.”

Watch the video below to see what a typical encounter with a wolf looks like. Note that wolves may be curious and do not always run away immediately, but typically do once made aware of human presence. Video courtesy of Oregon Department of Fish and Wildlife.

Wolves displaying behaviors such as rummaging through a campsite, approaching vehicles, and accepting food handouts are considered habituated. If a wolf rips up a tent or tears apart a backpack at a campsite, then it is habituated. Relatively few cases exist of humans being bitten or killed by wild wolves. In most situations, these wolves were sick, had become accustomed to eating from garbage dumps, or were fed by people, thereby losing their natural fear of humans and associating humans with food.

Any wild animal can be dangerous, particularly if it is provoked, sick, injured, protecting its young, has become accustomed to people, or has learned to associate people with food. Follow the recommendations below to minimize human-wolf interactions.

If you encounter a wolf

If you feel threatened by a wolf

Recreating with your dog

Dog owners need to be aware of the possibility of encountering a wolf, or other carnivore, if they live in, or plan to visit, potential wolf habitat anywhere in Washington. Wolves view domestic dogs (pets, herding dogs, hunting dogs, etc.) as competitors and will protect their territory from intruders.

Wolves are curious and territorial by nature and consequently may appear to “stand their ground.” However, wolves may also chase or fight with a dog that comes near their pups. If you encounter a wolf, do not run but leave the area. It is not unusual for wolves to follow a person at a distance until it is reassured they are leaving the area.

Wolves howl for several reasons, including announcing their presence to other wolves, locating members of their pack, and as a warning to intruders. Often times, wolves will bark-howl to indicate the intruder is too close.

To reduce the potential for interactions between a wolf and your dog, adhere to the following:

To find more information regarding wolves in Washington or to report a wolf sighting, visit WDFW's Wolf Conservation and Management website.

People experiencing interactions with wolves may contact a WDFW regional office. In an emergency situation, call 911.

Although wild wolves primarily feed on elk, deer, and moose, they have been known to occasionally prey on domestic livestock. Livestock producers can prevent or reduce the chance of such encounters by using one or more nonlethal wolf control methods.

If a livestock depredation by wolves is confirmed, the livestock owner may be eligible to receive compensation for the animal(s) lost. The Washington Department of Fish and Wildlife (WDFW) would like to work with livestock owners to help identify potential nonlethal techniques that could help protect livestock.