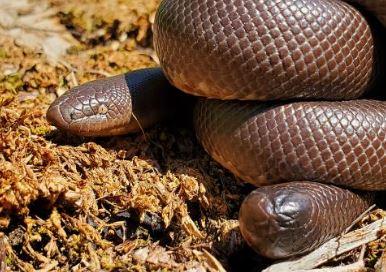 A rubber boa found in Thurston County.
Category: Reptiles
Family: Boidae
Common names: Rubber boa
If you see this species, please share your observation using the WDFW wildlife reporting form. Providing detailed information such as a photo and exact coordinates will improve the confidence and value of this observation to WDFW species conservation and management.

This species is likely more common than records show because: it is difficult to find these nocturnal, semi-fossorial snakes; most records are from chance encounters versus systematic surveys; and these snakes use a variety of habitats, suggesting they can adapt to different conditions.

According to NatureServe, the state conservation status of the northern rubber boa population is considered “apparently secure” in Washington. See the Conservation section for more information.

In the Northwest, this snake rarely exceeds about two feet in length. It is a thick-bodied snake with small eyes and tiny scales. It has a blunt tail that is similar in appearance to the head—which may serve to confuse predators, therefore, protecting the head. The species’ loose and wrinkled skin gives it a rubbery appearance and feel. The top of the snake is uniformly tan, brown, olive, gray, charcoal or rosy pink. The underside is yellow or cream and may have dark mottling. Females are larger than males, and juveniles resemble adults but are pinkish in coloration.

The northern rubber boa may be confused with the western yellow-bellied racer (Coluber constrictor mormon). Racers differ in having large eyes, large dorsal scales, and a tail that tapers to the tip. Racers are fast, aggressive snakes that will strike and bite if cornered or handled, whereas rubber boas are slow, non-aggressive snakes.

Northern rubber boas are found in a variety of habitats including prairies, shrubsteppe, grasslands and forests of various types. Their distribution is patchy in Washington. They are common in some areas and apparently absent from others. The wet, dense forests of the Pacific Coast Ecoregion and the dry, shrubsteppe, habitats of the central Columbia Basin are not considered typical rubber boa habitat, but the species has been found in both. Down woody debris, fractured rock, and loosely compacted rock are generally considered important for this species.

Rubber boas are active at night and spend much of their time below ground. They generally occupy locations under woody debris and rocks. They appear to return to the same site year after year as evidenced by their presence or their shed skins.

The species eats small mammals, birds, salamanders, lizards, snakes, and possibly frogs. Northern rubber boas are constrictors, which are snakes that wrap around their prey to crush and kill them.

Northern rubber boas are found in all Washington ecoregions. Few records have been submitted for the coastal forests, higher elevations of the Cascade Mountains or the central Columbia Basin. They are the most northern ranging boa in the Boidae family, occurring as far north as British Columbia.

This map from the Washington Herp Atlas illustrates the distribution of northern rubber boa  in Washington based on records in the WDFW database as of 2016. If you see this species in areas that are not indicated on the map or have more recent observations (less than 10 years), please share your observation using the WDFW wildlife reporting form. Of special interest are observations of this species from the Columbia Basin and Pacific coastal areas.

The state conservation status of the northern rubber boa is “apparently secure” based on the assumption that it is common according to the most current records. Basic life history and habitat information for the northern rubber boa in Washington is needed. This species occupies a variety of habitat types, suggesting it can adapt to a variety of habitat conditions; but, like other nocturnal, semi-fossorial snakes, the boa is difficult to find, and the records of this species are primarily from opportunistic encounters and not systematic surveys.

Threats to this species include habitat loss and fragmentation. Maintaining down woody debris, fractured rock, and loosely compacted rock and protection of overwintering sites may be important for sustaining local populations.