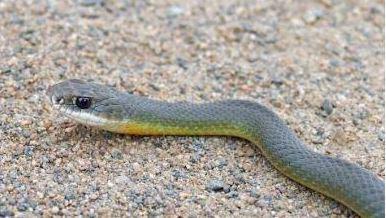 Racer (subspecies: western yellow-bellied)
Category: Reptiles
Family: Colubridae
If you see this species, please share your observation using the WDFW wildlife reporting form. Providing detailed information such as a photo and exact coordinates will improve the confidence and value of this observation to WDFW species conservation and management.

This snake is one of 11 subspecies of the North American racer (simply known as “racers”).

According to NatureServe, the state conservation status of the western racer population is considered “secure” in Washington.

Adult western racers can be up to 3 to 6 feet in length. They are a slender snake that have a darker topside (may be brownish, dark green, gray, or blackish) and light colored belly.

The rubber boa is sometimes confused with the racer because both species have similar coloration. Racers differ in having large eyes, large dorsal scales and a tail that tapers to the tip. Racers are fast, aggressive snakes whereas rubber boas are slow, non-aggressive snakes.

Racers occur in warm, dry, open, or brushy country. They are often observed streaking across roads.

The racer holds its head and neck above the ground when hunting, and it may climb into shrubs. The diet of racers includes small mammals, reptiles, and insects.

They breed in early summer. Females lay eggs in cavities in such places as decaying logs and animal burrows. The eggs hatch in late summer.

This map from the Washington Herp Atlas illustrates the distribution of western racer in Washington based on records in the WDFW database as of 2016. If you see this species in areas that are not indicated on the map or have more recent observations (less than 10 years), please share your observation using the WDFW wildlife reporting form.