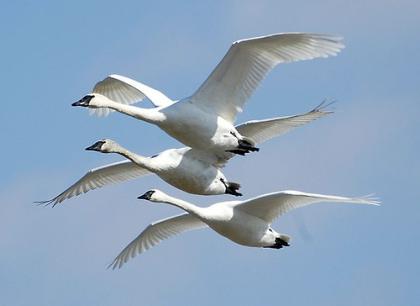 Trumpeter swans in flight (US Army Corps of Engineers HQ) 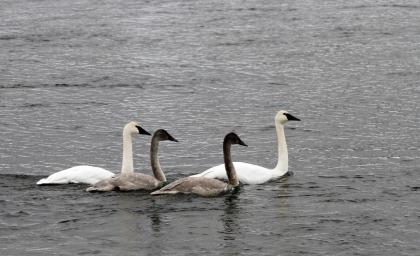 Trumpeter swans are large birds, measuring up to 64 inches in length and with a wingspan of about 10 feet; males can weigh up to 28 pounds. They are the heaviest native bird in North American. Adults are white. They have large black bills. Trumpeter swans are noticeably larger than tundra swans. For information on how to identify trumpeter swan, check out the Resources section.

In forested regions of Alaska and Canada’s western Yukon and northern British Columbia, trumpeter swans breed in shallow ponds, lakes, wetlands and rivers, with the largest numbers of breeding pairs in Alaska.

Both trumpeter and tundra swans can form long-term pairs and raise their young together, with young birds following the parents during the first year to important stopover and winter areas in search of food and places to rest.

Their natural diets are made up of aquatic vegetation and underwater roots and tubers. They often eat with their heads submerged underwater. However, with changes in the availability of their native habitats, current wintering habitat is supplemented by eating grasses and leftover agricultural crops like corn and potatoes.

Swans are an example of a long-lived waterfowl species, with several individuals documented to live more than 20 years. Through the year, about five to 15 percent of swans die from natural causes, and about two percent wintering in western Washington die from hitting power lines or ingesting lead shot or fishing weights.

Trumpeter swans that migrate to Washington originate from forested regions of Alaska and Canada’s western Yukon and northern British Columbia for the winter. The birds arrive generally in late October and stay in northwestern Washington over the winter before beginning their northward migration in April to their breeding sites.

They nest in central Alaska and points north and spend their summers in Alaska, western Yukon, and northern British Columbia.

For a map of range-wide distribution and conservation status of the trumpeter swan, check out NatureServe Explorer.

Trumpeter swans and tundra swans are off limits for hunting. For current rules about these swans in the state, be sure to check the Washington Game Bird and Small Game hunting regulations.

Hines, R.W. Ducks at a Distance: A Waterfowl Identification Guide. Department of the Interior, U.S. Fish and wildlife Service.