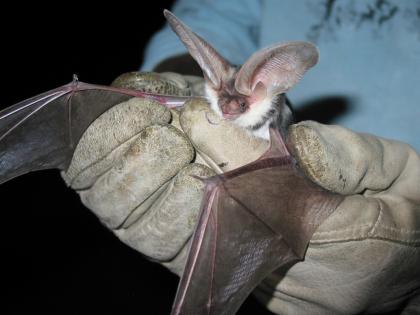 The population size of spotted bats in Washington is low. Individual populations of spotted bats are apparently disjunct and may be vulnerable to human disturbance. Population trends, life history, and habitat requirements are unknown.

White-nose syndrome is a deadly fungal disease that has been confirmed in some Washington bat species, but to date, no diagnostic evidence of the disease has been detected in spotted bats. It is unclear which species of bats may be vulnerable to this disease in Washington. This disease does not affect humans, livestock, or other wildlife.

The spotted bat is one of the larger bat species in Washington; it is about 4 to 4 1/2 inches long and has a wingspan of about 14 inches. It is easily recognizable by its black dorsal fur with two large white spots on the shoulders and one on the rump. Smaller white patches occur at the base of the ears, and the belly is whitish with black underfur. Individual hairs are short, pale at the base, and darker brown or grey at the tips. Wing membranes are pinkish-red to grey-brown in color. A bare patch, circular in shape and non-glandular, occurs on the throat and may be hidden beneath the fur.

The long pinkish ears are joined at their bases across the forehead and have transverse ribs extending to their rear edge. A fringe of fine hairs extends along the top border on the back of the ears. The tragus is long and broad, and the calcar is not keeled.

The spotted bat is one of the few bats with an echolocation call (6-16 kHz) that is audible to humans; it resembles insect-like high-pitched metallic clicks, which is distinctive from other bats in Washington.

Spotted bat presence is most dependent on the availability of high, sheer cliffs in arid land, but in Washington and the Okanogan Valley of British Columbia, they forage over a variety of habitats adjacent to cliffs, including ponderosa pine forests, hay fields, rock cliffs, talus slopes, sagebrush bunch grass, sparse ponderosa pine bunchgrass, rivers, open water, and hardwood slopes. The presence of cliffs with suitable roosting crevices determines species presence. Occupied sites in Washington range in elevation from 980 to 2790 feet.

These bats are aerial insectivores that feed on medium-sized moths, especially noctuid moths. Individuals forage alone, visiting several sites a night and returning to them over consecutive evenings.

This species is solitary and is never found in colonies. Females produce one young per year between mid-June to early July.

Wintering behavior is poorly understood, but the species presumably hibernates near its summer range.

The spotted bat inhabits arid environments in western North America from south-central British Columbia to central Mexico; the core area of its distribution appears to be the southwestern United States.

It was not known in Washington until 1991 but is now documented in seven eastern Washington counties. Populations are likely disjunct and highly localized around suitable roosting cliffs and water sources and absent in intervening areas. Population size in Washington is probably relatively small, and trend is unknown.

The spotted bat occupies a range of habitats in Washington from shrub-steppe and forests (e.g., ponderosa pine, Douglas-fir) to cliffs and water sources (e.g., marshes, open water, riparian areas) from 300 to 850 m in elevation. They appear to roost almost exclusively in the crevices of steep cliffs. There is limited information about this species' population size and trends and reproductive and wintering behavior, although there is some evidence that the spotted bat moves to lower elevations to overwinter. Changes in precipitation that limit the availability of water sources or result in a decrease of prey could negatively affect this species. Increased fire and shrub-steppe degradation (including greater occurrence of cheatgrass and other invasive plants) in the Columbia Basin could also reduce habitat quality for this species.

Other conservation threats and actions needed :