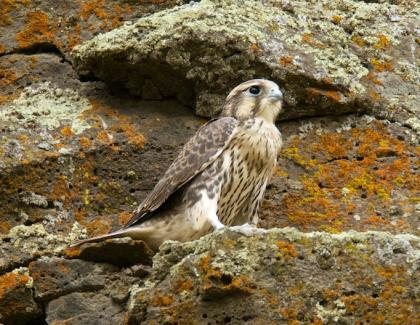 The prairie falcon population in Washington is dependent on having suitable cliffs for nesting and quality steppe and shrubsteppe for foraging habitat.

The prairie falcon ranges from 15 to about 20 inches in length and has a wingspan that ranges from 3 to 3 ½ feet. This species is pale brown above and has a white underside that is spotted in adults and streaked in immatures. The prairie falcon is paler with more narrow facial markings than the peregrine falcon and, in addition, have dark axillaries (“armpits”) and dark bars on the underside of their wings.

Prairie falcons inhabit the arid environments of eastern Washington, nesting on cliffs in arid steppe and shrubsteppe habitat. Prairie falcons use a wide variety of cliffs, from those made of basalt that are 400 feet tall to scant escarpments raised only 20 feet above sloping canyon walls.

For range-wide distribution and conservation status of this species, check out NatureServe Explorer and the International Union for Conservation of Nature Red List.

Falconry is the art of training raptors (birds of prey - falcons, eagles, hawks, and owls) to hunt in cooperation with a human and is the sport of actively pursuing wild quarry with those birds. The Washington Department of Fish and Wildlife issues falconry permits, regulates the sport, and remains in contact with the falconry community. No one under any circumstances may keep a raptor as a pet. Only licensed falconers may have birds of prey, and these birds must be flown freely and hunt regularly. State and federal regulations, expertise and dedication of falconers, and self-policing by the falconry community keep the birds in high-quality care. Learn more about the history of this sport and the requirements for falconry in Washington.