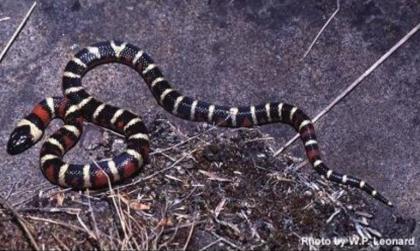 In Washington, this snake occurs at the northern extreme of its range, and the population is isolated from the rest of its range by approximately 200 miles.

The species’ range in Washington is small with few individuals documented. They occur in the Columbia River Gorge in an area of the state that is likely to see increased development and vehicular traffic.

The California mountain kingsnake is a medium-sized snake (1.5 to 3 feet in length) with red, black, and white bands. The red bands are bordered by black. No other snake in Washington has this color pattern. This species superficially resembles the venomous coral snake, but it is harmless.

For more details about the California mountain kingsnake, see the Washington Herp Atlas.

Little is known about this species in Washington. It is chiefly diurnal, but may be nocturnal during warm weather.

Similar to other snake species occupying the same area, it most likely becomes active in late March or April and remains active until October.

Mating probably takes place in May with three to nine eggs laid in June or July. The incubation period is approximately 60 days

The Washington range is limited to the southernmost areas of eastern Skamania County and western Klickitat County. The Washington range is isolated from the rest of the species' range by approximately 200 miles. Unsubstantiated reports exist for the Blue Mountains and Yakima County. Nothing is known about their abundance in Washington.

This map from the Washington Herp Atlas illustrates the distribution of California mountain kingsnake in Washington based on records in the WDFW database as of 2016. If you see this species in areas that are not indicated on the map or have more recent observations (less than 10 years), please share your observation using the WDFW wildlife reporting form.

No information exists regarding the sensitivity of this species to climate change. Due to its occurrence in moist, typically open riparian, microhabitats in Oregon White Oak-Ponderosa Pine forest, this species may have some sensitivity to altered precipitation and fire regimes, particularly as an egg-layer with only weakly calcified eggs (such eggs are strongly affected by solid moisture levels), that result in habitat loss or degradation. In Washington, species distribution is extremely small (around 20 mi.) and at the northern extent of the range, and occurrence is isolated and disjunct from the rest of the range by 200 miles. Based its reproductive mode, oviposition or active-season habitats that become either too wet or too dry may place it at a reproductive or physiological disadvantage. Further, it may be dietarily dependent on several egg-laying reptiles (especially western fence lizards and western skinks) that may be similarly affected.