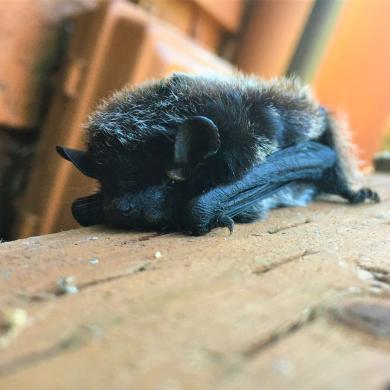 The silver-haired bat is a medium-sized bat with very dark fur tipped with silver or white. The wings and tail membrane are black. Ears are short and round with a short, blunt-tipped tragus. The dorsal surface of the tail membrane is partially furred and the calcar lacks a keel.

Food habits and foraging
In the Pacific Northwest, this species forages mainly on moths, flies, beetles, leafhoppers, true bugs, neuropterans, and caddisflies. Moths and flies are important prey in some coastal wet forests, with evidence of moderate dietary specialization on moths in inland dry forests.

Foraging typically occurs in and over forests and riparian zones; over openings, streams, and ponds; and along forest margins. In western Washington, peaks in nocturnal activity occur for several hours after sunset and again before sunrise. Foraging may be reduced on summer nights with cool air temperatures (<8°C, <46°F), but is known to extend through winter in Washington. Adults generally forage singly, although pairs and groups of 3 to 4 bats are also observed. During migration, silver-haired bats feed along intact riparian areas in arid rangelands. Because of their short broad wings, low- to mid-frequency echolocation calls, and slow agile flight, they can detect and capture small insects at close range.

Reproduction
Mating likely occurs during autumn migration and winter. Pregnancy lasts 50-60 days, with births occurring in late June or early July. Females give birth to one or two young, with two being most common. In Washington, volant young have been detected beginning in early August.

Silver-haired bats range broadly across North America from southeastern Alaska across the southern half of Canada south through most of the contiguous U.S. and into northeastern Mexico. The species is present throughout Washington.

Silver-haired bats typically reside in forests and riparian zones. Older, more structurally diverse forests generally appear preferable to younger, intensively managed forests due to differences in roost availability and canopy structure suitable for foraging. In Washington, this species occurs in forests and suburban/developed areas and has been described as largely absent from shrubsteppe except during migration. There is some evidence which suggests the species is a summer resident in some areas of shrubsteppe; clumps of trees found in riparian areas or on farmsteads in this habitat may be sufficient to support resident populations. Elevations from sea level to at least 1,830 meters are used.

Their day roosts occur in large trees in intermediate stages of decay under loose bark, in cracks or crevices, and in cavities. Solitary individuals may switch roosts daily or less frequently.

Information about night roosts is lacking, but the species rarely if ever occurs at sites (e.g., bridges, buildings) commonly used by other bat species. During migration, silver-haired bats roost mainly in trees. Most migrating individuals roost alone, although single bats may occur in different parts of the same tree. Other roost structures used during migration include buildings, lumber piles, fence posts, utility poles, and mines. Migrating bats may remain torpid for several days during cool temperatures.

Hibernation and migration
Silver-haired bats occupy a variety of winter roost sites, including trees, buildings, abandoned mines, and more rarely in rock crevices and caves. In western Washington, buildings, trees, and bat houses are occupied at this time of year. Winter roost trees include large western red cedar, large Douglas-fir trees and snags, and decadent big-leaf maples, with crevices and sites beneath loose bark being occupied. Hibernation roosts require stable microclimates. Ambient temperatures of –0.5 to –2ºC (28.4–31.1°F) have been reported in old mines used as hibernacula. During winter, silver-haired bats hibernate and/or use daily torpor depending on the severity of weather conditions.  Hibernation and winter daily torpor may be interspersed with bouts of foraging, especially in western Washington. Silver-haired bats winter alone or in small groups that can contain both sexes.

Most northern populations migrate to the more southern parts of the species’ range to overwinter. However, Washington’s population is comprised of both year-round residents and migratory individuals. Museum records and detections of foraging and roosting animals suggest that large numbers of silver-haired bats occur year-round in western Washington, whereas smaller numbers are present in eastern Washington. It appears that significant numbers of individuals also migrate through the state, as indicated by mortality records from wind energy facilities and other data. Spring migration in Washington occurs from about late April to late May and that fall migration lasts from about mid-August to late October. This species appears to migrate singly or, less often, in small groups. Individuals fly about 250-300 km per night while migrating.

*NOTE: In general the CCVA methodology does not include human responses to climate change in sensitivity rankings. However because wind energy development is a direct and expanding response, and has an outsized impact on this species, it is included here. Without wind energy development as a factor, sensitivity would be LOW. A significant portion of the siliver-haired bat population in Washington is highly migratory. Collisions with wind turbines are a major mortality source for migrating individuals, thus the expansion of wind energy facilities in response to climate change will likely have a strongly negative impact on this species. Additionally, silver-haired bats have a broad geographic distribution throughout North America and display a preference for old-growth forests and riparian areas between 0 to 1,830 m in elevation, although a variety of other habitats are used, including younger forests and human developed areas. Roosting occurs mainly in trees, especially in the warmer months; buildings, abandoned mines, and caves (rarely) are also used. Silver-haired bats are probably sensitive to the structural changes in forests caused by logging and fire, which would reduce roosting and possibly foraging opportunities. Thus, altered forest fire regimes associated with climate change could degrade or eliminate roosting habitat on a local scale. However, increased insect outbreaks in forests could benefit this species by providing more snags for roosting, unless management responses result in extensive salvage logging or clearcutting. Warmer, drier conditions could affect insect availability and reduce drinking sources for this species, which could impact survival and reproductive output. Hotter, drier conditions in the Columbia Basin could also negatively affect the migration behavior of a significant portion of the population passing through Washington.