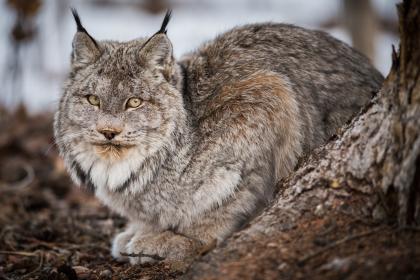 A small population of fewer than 50 Canada lynx occupies high-elevation forests in the North Cascades, almost entirely within the western half of Okanogan County. Consequently, this lynx population is restricted to a small portion of its historical range, which once extended south through Chelan County and across Ferry, Steven, and Pend Oreille counties to Idaho. Small population size, habitat loss and fragmentation from large wildfires, and climate change are considered the most significant threats to lynx. To protect the species, lynx trapping in Washington was prohibited in 1991 and forest managers use fire suppression to limit the loss of critical habitat.

The lynx is a mid-sized member (11 to 38 pounds) of the cat family (Felidae) that occurs only in the boreal forests of North America. The lynx is larger than a bobcat but smaller than a cougar. The most distinguishing attributes of the lynx are its long legs, large furry paws, long cheek hairs, blunt tail with a black tip, and tufted ears. Males and females are similar in appearance, but males are slightly longer and heavier than females. A lynx may be confused with a bobcat which has shorter legs, smaller paws, and a slightly longer tail with a black and white tip.

Lynx occupy subalpine and boreal coniferous forests that have substantial accumulations of snow during the late fall, winter, and early spring. In Washington, lynx habitat includes Engelmann spruce, lodgepole pine, and  and subalpine fir forests higher than 4600 feet in elevation.

Lynx are prey specialists because snowshoe hares make up the bulk of their diet. Lynx are physically adapted to foraging for the hares in deep, soft snow; their large feet give lynx a competitive advantage over other mid-sized carnivores in these conditions, such as coyotes and bobcats. Climate change may alter this advantage (see the Climate vulnerability section). This cat typically hunts for the hares in early successional forest where hares are most abundant.

Mating occurs in early spring, with an average litter size of 4 to 5 kittens born in late spring. Females commonly use mature forest stands for denning and their den sites are often located in tangled piles of fallen trees.

Canada lynx once occurred throughout the northern counties of Washington, but they are now largely restricted to a single area that encompasses western Okanogan, northern Chelan, and eastern Whatcom and Skagit counties. The size of the lynx population in this area was estimated at approximately 87 animals in the early 2000s, but this estimate was based on the extent of habitat prior to the large Tripod fire that substantially reduced lynx habitat in Okanogan County in 2006. This loss of habitat has likely caused Washington's lynx population to decline over the last 10 years.

Maintenance of the state's population is also likely dependent upon demographic support from neighboring populations in British Columbia and Alberta.

Lynx inhabit higher elevation boreal forests and exhibit sensitivity to various environmental changes resulting from climate change. Lynx are reliant on a soft, deep snowpack during winter for hunting. A change to reduced or wetter snow conditions because of climate change would place lynx at a competitive disadvantage compared to other predators. Lynx are usually considered snowshoe hare specialists; increasingly variable timing of the arrival and melting periods of snowpack may lead to local extirpations of hares, likely affecting lynx survivorship and recruitment. However, lynx have been known to switch to other prey when hares are at low densities. Altered wildfire regimes (especially those that create larger, more intense fires) and outbreaks of forest insects and tree disease will likely reduce of the extent of some important forested habitats (e.g., mature stands) for lynx. However, less severe fires of greater frequency may benefit the species by creating additional early seral-stage coniferous stands preferred by hares.

In Washington, there currently is no trapping season for lynx.

In Washington, the lynx was state listed as a threatened species in 1993. This listing prompted Washington Department of Natural Resources to develop a lynx habitat management plan for the Loomis State Forest in 1996 (and updated in 2006), which is an area that supports the large majority of Washington’s remaining lynx population.

In 2016, the Washington Fish and Wildlife Commission listed the lynx as state endangered; that status continues to protect lynx from take or harassment. The prohibition on the use of body gripping traps in Washington also provides protection from injury or death of lynx in traps set for other species. Federal listing of lynx as threatened (in 2000 and reaffirmed in 2003) also protects it from being shot or killed and prompted the development of a federal lynx conservation assessment and strategy in 2013.

WDFW has partnered/cooperated with federal and other state agencies, tribes, universities, and conservation organizations to conduct and contribute to lynx surveys and research in Washington. WDFW and representatives from these agencies and organizations have been involved in meetings/workshops at Wildlinks conferences to develop and implement a conservation strategy for assessing lynx status and to further lynx recovery in Washington.

Since 1990, the WDFW has partnered with Washington State University student researchers to conduct a substantial amount of field research focused in the Okanogan Lynx Management Zone to evaluate home range composition, density, habitat selection, and habitat connectivity of lynx. WDFW research has also focused on the habitat selection, habitat matrix and density and, with University of Washington student researchers, predation of snowshoe hares.

Since 2005 in northeastern Washington, lynx surveys have been conducted using various techniques (camera stations, hair-snare stations, and track surveys). WDFW joined U.S. Forest Service (USFS) Colville National Forest to do surveys from 2005 to 2008 in specific Lynx Management Zones (LMZ); from 2009 to 2011, citizen scientists with the non-profit organization Conservation Northwest joined WDFW and USFS to do hair-snare station surveys in the Kettle LMZ.

More recently (since 2010), WDFW biologists have worked with Washington State University researchers to assess lynx occupancy and habitat association in the Okanogan and Kettle LMZs. These collaborators also conducted research to assess snowshoe hare densities in these two management zones and methods for estimating hare densities at regional scales in the historical range of the lynx in Washington.