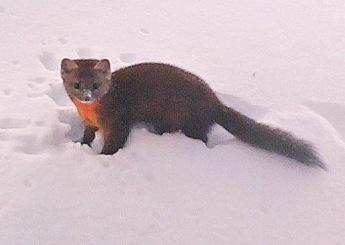 The population of coastal Pacific martens in the state is very small; they are separate from the secure populations of Pacific martens in the Cascade Range and eastern Washington. Trapping, loss, and fragmentation of late-successional forests at low elevations, and small population size of coastal martens are likely factors in the decline of the species in Washington. Recent photos of coastal martens verify that they still occur on the Olympic Peninsula, but little is known about their population.

Pacific martens are a small to mid-sized forest carnivore in the weasel family. Typically, males weigh 1.3 to 2.2 pounds and females weigh 1.0 to 1.5 pounds. The total length of males (20 to 28 inches) is greater than females (18 to 24 inches). Tail length is 6.5 to 7.5 inches. Martens have a coat color that can vary from light to dark brown depending on individual, however they are commonly cinnamon brown in coloration. Adult martens commonly have a bright orange chest blaze that is diagnostic to the species; juveniles have a creamy white chest blaze that becomes orange as they mature.

A Pacific marten may be confused with a fisher, which is larger (about 3 to 3.5 feet in length), darker, and have a much longer tail (14 to 15 inches). These two species can occupy some of the same areas on the Olympic Peninsula.

Listen to the sounds of a Pacific marten!

Historical accounts indicated that Pacific martens occupied lower elevation forested landscapes in the western coastal plain and foothills of the Olympic Peninsula. These landscapes were dominated by older coniferous forests and riparian forest habitats, but these areas were heavily logged in the early and mid-1900s. Extensive commercial timber operations in these areas resulted in the substantial loss and fragmentation of older forest habitat and it also provided greater trapper access to habitats occupied by martens.

The diet of Pacific martens is primarily small mammals, such as mice, voles, chipmunks and squirrels, but also includes mid-sized mammals and birds, insects, carrion and fruits/berries.

Pacific marten breed in summer and bear 1 to 5 young, typically in a hollow tree, snag, or rock den, the next spring. Nursing lasts about 6 weeks, and the young become independent by late summer.

Despite their small size, Pacific marten have relatively large home ranges of 0.8 to 10.5 square miles; male home ranges are considerably larger than those of females.

The geographic range of the coastal population of Pacific martens in Washington historically included the Olympic Peninsula and the southwestern portion of the state (west of Interstate 5). Martens are not currently known to occupy the forested areas south of Olympic National Forest or those in southwestern Washington.

Pacific martens are also known to occur in the Cascade Range and in the forests of northeastern and southeastern Washington, but these populations are considered secure and separate from the coastal population of Pacific martens that occur on the Olympic Peninsula.

For a map of worldwide distribution of Pacific marten and other species' information, check out NatureServe Explorer.

The coastal population of martens in Washington is very poorly known (including its habitat use), making it difficult to predict climate change impacts. Altered fire regimes and drier, warmer conditions in the Olympic Mountains that reduce the distribution and connectivity of important habitat features (e.g., large diameter tree stands with high canopy cover) may negatively impact this species. Martens rely on deep and persistent snowpack to exclude predators, provide high-quality hunting conditions, and provide winter resting and denning sites. Future reductions in snowpack in the Olympics may affect martens and their prey due to creation of more thermally variable subnivean space and could increase competition with fishers.

The greatest conservation threat for this population is lack of information on the size, full distribution, structure, genetic characteristics or stability of the coastal marten population in order to assess its distribution, abundance and status. Conservation concerns mainly center around small population size, disjunct populations, limited genetic variability, vulnerability to incidental mortality, and the regional differences in threat vulnerability. Incidental capture in a live trap and road-kill mortality are possible threats but are of less concern.

Historically, the coastal marten occupied lowland coastal forests along the western coastal plain of the Olympic Peninsula and higher-elevation forests in the interior.  Marten captures by trappers became less frequent in the mid-1900s, and concern grew that over-trapping as well as loss and fragmentation of low-elevation older forests caused the decline or extirpation of this species on the Peninsula. Occasional detections between the 1980s and 2008 indicated that a small remnant population might still occur on the Peninsula, but its location was unknown. Photos of coastal martens from 2015 to 2019 verified that one or more resident populations still existed in the Olympic National Park and Olympic National Forest.

Conservation actions needed to address the lack of information about coastal marten is to support/implement broad monitoring efforts and associated research into population status in areas likely to support this species.