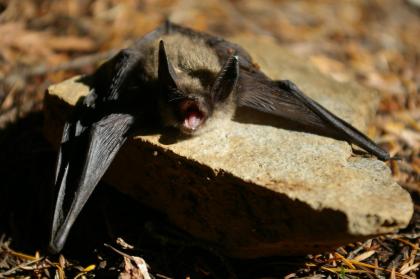 In Washington, Keen’s myotis is one of three small, long-eared myotis bats. This species is poorly known and probably rare. Loss of large decadent trees and snags is likely an important threat.

White-nose syndrome is a deadly fungal disease that has been confirmed in some Washington bat species, but to date, no diagnostic evidence of the disease has been detected in Keen's myotis, but has been detected in western long-eared bats (Myotis evotis). It is unclear which species of bats may be vulnerable to this disease in Washington. This disease does not affect humans, livestock, or other wildlife.

Keen’s myotis is one of three small, long-eared myotis bats in Washington. It is so morphologically similar to the western long-eared bat that species determination between the two is based on small skeletal differences and the two may actually be one species.

Keen’s myotis is closely associated with low elevation, moist, mature coastal conifer forests during the active season and may move to hibernacula in mid-elevation caves for winter.

The few documented maternity sites have been found in caves and trees. Keen’s myotis females return to maternity colonies in May and give birth to a single pup between early June and mid- to late July.

Males roost solitarily. Males often roost in large trees or snags. Roost sites may be limiting in some parts of the range.

Foraging occurs more frequently in mature and old growth forests than clearcuts or young forests; riparian areas are likely important foraging habitats. Keen’s myotis flies rather slowly while foraging and is adapted to eat a variety of insects including spiders, caddis flies, moths, and flies. It is able to glean prey as well as gather prey on the wing.

Its physical characteristics of long ears, short, broad wings, and high frequency, low intensity echolocation are adaptations that enhance the ability to fly and forage in structurally complex forests.

This species has one of the smallest ranges of any North American bat, occurring in coastal areas from southeast Alaska to northwestern Washington, including the Olympic Peninsula and Puget Sound. Abundance in Washington is unknown, but it is assumed to be rare. Trend is unknown.

Keen's myotis is a relatively poorly known species, especially in Washington, thus its vulnerability to climate change is difficult to judge.  It has a small geographic distribution in the state and is probably mostly restricted to moist coastal forests.  The few known hibernacula (all from elsewhere in the range) occur in mid-elevation caves, suggesting that low-elevation caves may to be too warm for hibernation.  Moths and spiders comprise a sizeable part of the diet, but a variety of other insects are also eaten.  Warmer temperatures and changes in precipitation patterns may negatively affect roosting conditions and prey availability for the species, but this remains speculative.

See the Climate vulnerability section for information about the threats that climate change poses to this species.