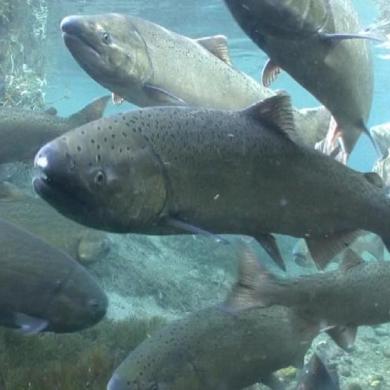 In general, Chinook salmon appear sensitive to warmer water temperatures, low flows, and high flows. Warmer water temperatures can affect physiological performance and energy budgets, as well as developmental rates and the timing of key life-cycle transitions (i.e., phenology). Lower stream flows have been linked to mass mortality events of Chinook salmon. Extreme high flows can reduce the likelihood of egg survival during incubation, and both low and high flows can affect adult migration. Temperature: Chinook salmon appear sensitive to elevated freshwater temperatures both as juveniles rearing in tributary streams and as adults migrating up river networks to spawn. Water temperatures positively affect metabolic costs, so warming reduces the amount of time a spawning adult can persist in freshwater and decreases the total distance a fish can migrate on a given level of energy stores. Indeed, Chinook salmon that migrate slower, and accrue more energy loss, have higher mortality rates in the Columbia River. In addition to energetic effects, temperatures in excess of ~17˚C (the approximate pejus temperature for Chinook salmon) begin to thermally stress individuals, making them more vulnerable to pathogens and other health issues. Episodes of high water temperature have led to large mortality events in several river systems within or adjacent to the Columbia River Basin. However, in the Columbia River, cool tributaries provide refuge from heat stress for migratory Chinook salmon, and may reduce the sensitivity of this species to warming temperatures. However, time spent in thermal refugia can come at a price, such as increased exposure to angling pressure, later arrival at spawning grounds, and other factors. Warming temperatures in the streams where Chinook salmon rear can have negative effects even when temperatures are not near the thermal maxima of the species. For example, the strength of density dependence in fish growth was positively related to water temperature, which corroborates the mechanistic predictions of bioenergetics models. This suggests warming temperatures decrease the carrying capacity of streams for rearing juvenile salmonids. Because Chinook salmon rear in streams for up to three years, they are vulnerable to heat stress during low flow periods of late summer and fall. However, the life-history diversity of this species (particularly the diversity in age-at-maturity) likely enhances resilience to mortality events such as extreme flows or temperatures. The variation in sensitivity among Chinook salmon populations and life-histories is difficult to predict. Upriver populations are potentially more sensitive to water temperature and/or low flows because of their increased cumulative exposure to thermal stress and the higher metabolic demands of a longer migration. However, these populations are likely better adapted to deal with thermal and energetic stress compared to lower Columbia River populations. For example, lower river populations (particularly ocean-type/fall run stocks) have lower energy stores and may be just as vulnerable to temperature-induced increases in metabolic costs as are upriver populations. In terms of run timing, stream- and ocean-type life histories (i.e. spring and fall runs, resp.) each have their own unique sensitivities to temperature. Stream-type fish rear for longer in freshwater, and thus have greater cumulative exposure to potential water temperature-related stressors in tributary streams. However, ocean-type individuals migrate to sea at a smaller size (typically age-0 fry) and may be more vulnerable to any energetic impacts of warmer temperatures in lower rivers and estuaries. As adults, stream-type individuals migrate during the cooler months of the year in spring and then reside upriver before spawning in the fall; whereas ocean-type fish migrate during the warmest part of the year in late summer and fall, but spawn immediately afterward and therefore spend much less time running negative energy budgets in freshwater. Thus stream-type adults are relatively more vulnerable to heat stress and energy demands during summer residence, whereas ocean-type adults are more vulnerable to stress during migration itself. Assessing how each life-history has responded to contemporary variation in climate is challenging because of confounding factors—stream-type populations are located higher in river systems and have been heavily affected by their increased cumulative exposure to dams Flow regimes: Low flows during the summer and fall may be stressful for migrating adults. Mass mortality events in both fall and spring-run Chinook salmon have been linked to high temperatures due to low flows. Some salmon populations may also depend on high flows to allow passage to upstream spawning areas. For example, spring-run (stream-type) Chinook often migrate to spawning grounds during the high flows that occur from late-winter through early-summer. However, high flow events during the fall and winter can scour the gravels where embryos incubate, reducing egg-to-fry survival. Increased severity of winter floods has been linked to decreased egg-to-fry survival in Washington. Snowmelt and the resulting runoff in spring may be important for aiding the seaward migration of salmon smolts. Reduced flows during the spring have both direct and indirect effects on smolt migrations. The reduced stream velocities increase the travel time required for smolts to reach the ocean – this in turn increases the time of exposure to predators. Low flows may also make smolts more vulnerable to predators per unit of time exposed. With warming, species such as smallmouth bass, walleye, and Northern Pikeminnow will almost certainly become more effective predators on salmon smolts. Spring-run Chinook are particularly vulnerable to predation because they originate higher in river networks and have longer migrations to sea. However, although fall-run Chinook have shorter seaward migrations, many populations emigrate as age-0 fry, which makes them vulnerable to broader size-spectra of predators, likely increasing their predation risk per unit time of migration. Marine: Increases in ocean and estuarine temperature, increased stratification of the water column, and/or changes in the intensity and timing of coastal upwelling may alter primary and secondary productivity, with potential impacts on growth, productivity, survival, and migrations of salmonids. For example, cool Pacific-Decadal Oscillation (PDO) years have historically coincided with high returns of Chinook salmon, while warm PDO cycles coincided with declines in salmon numbers. In general, changes in coastal ocean habitat quality and productivity could negatively impact Chinook salmon.