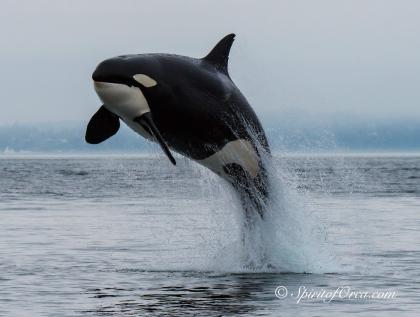 Three ecotypes of killer whales regularly occur in Washington: fish-eating residents, mammal-eating transients (or Bigg’s), and offshores. The Southern Resident population has shown an overall declining trend since 1995, falling from 98 whales to 73 whales as of December 2021, and is federally listed as endangered in the U.S. and Canada. The transient and offshore populations are stable or increasing, although the species is broadly listed as endangered in Washington state due to the status of the imperiled Southern Residents.

Reduced availability of Chinook salmon, elevated marine contaminants, and noise and disturbance from vessel activity have limited the Southern Resident population’s productivity. Increased shipping traffic and the associated threat of large oil spills also have the potential to negatively impact the health and status of all three populations.

Killer whales are the largest member of the oceanic dolphin family. This species may weigh up to 11 tons and be up to 32 feet long. They are mostly black with white eyebrow patch, and white underside extending from throat to tail, including flanks.

Killer whales become sexually mature at about 12 to 16 years of age. Females have calves every three to eight years and become reproductively senescent when 35 to 45 years old. The estimated maximum lifespan is 80 to 90 years for females and 50 to 60 years for males.

Killer whales are distributed nearly worldwide. In Washington, they occur in most of the state's marine waters.

Only small portions of both transient and offshore populations normally occur in Washington at any one time. The Southern Resident population is comprised of three highly stable social groups (J, K, and L pods) that historically has inhabited waters around the San Juan Islands and the eastern Strait of Juan de Fuca from late spring to fall. These patterns appear to be changing in recent years, with Southern Residents spending less time in Puget Sound.

Transients are part of a single population ranging from southeastern Alaska to California. In contrast to the Southern Resident population, the west coast transient population has shown considerable growth since the 1970s in response to the recovery of its marine mammal prey base and is now estimated to number more than 500 whales and be near carrying capacity.

For worldwide distribution of killer whales and other species' information, check out NatureServe Explorer.

Climate change will likely impact all three ecotypes of killer whales (Southern Residents, transients, offshores) in Washington.  This will occur mainly through alterations in prey abundance (i.e., availability of Chinook salmon, marine mammals, sharks, and other prey) resulting from (1) changes in marine food webs, (2) alterations in freshwater habitats occupied by salmon (for Southern Residents), and (3) rising sea level, which may submerge or render unsuitable some traditional pinniped rookeries and haulouts (for transients), and some nearshore habitats required by salmon (for Southern Residents).  These impacts will likely result from increases in marine and freshwater temperature, increases in ocean acidification, and altered levels of terrestrial precipitation and runoff.  Southern Resident whales are specialists on Chinook salmon, which are themselves quite vulnerable to climate change.

All three populations of killer whale occurring in Washington carry heavy loads of environmental contaminants, face a continuing risk of major oil spills in their ranges, are susceptible to a disease outbreak, and will likely experience the impacts of climate change in the future.

Washington’s Governor Inslee issued an executive order in 2018, directing state resources toward Southern Resident Killer Whale (SRKW) recovery. The order also assembled the Southern Resident Orca Task Force, bringing together tribal, federal, state and local representatives with members of private and non-profit sectors. That two-year effort resulted in a comprehensive report detailing 49 recommendations, targeting the three main categories of threats. Many resources and management activities have derived from those recommendations, including in Washington:

Nevertheless, expanded actions will very likely be needed to achieve recovery of the southern residents.

Visit our Killer Whale Management and Conservation page for more information, including how you can help.