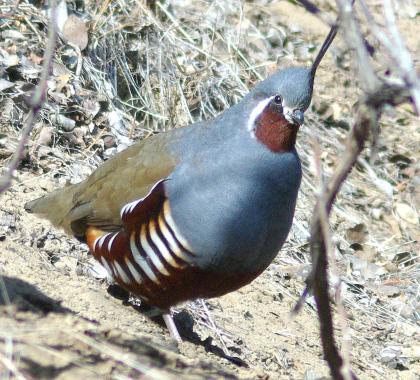 Mountain quail are managed as upland game birds. For current rules about hunting mountain quail in the state, be sure to check the Washington Game Bird and Small Game hunting regulations.

The mountain quail is about 11 inches in length. Two long, thin black plumes adorn the head. This bird is gray to brownish above and it has a gray breast. Its sides are rust-colored with white barring. Its throat is rust-colored, outlined with a vertical white stripe on both sides.

This species requires dense shrub cover, brushy, riparian habitat in dry areas, and brushy slopes. They are found in dense cover with scattered open areas on slopes in foothills and mountains. They use dense thickets resulting from fires or clear cuts, and they are seldom found far from this cover. In summer, the quail require a source of water, which may limit their nesting range.

Diet varies with the season but consists primarily of seeds, bulbs, leaves, berries, and some insects. One of the most important foods is sumac. Insect and other animal matter are a minor source of food, comprising less than five percent of the diet overall.

Mountain quail nest on the ground in dense cover, usually sheltered by a shrub, log, or clump of grass. Like other quail, their nests are shallow depressions lined with grass, needles, leaves, and feathers. Females lay nine to 10 eggs, which both parents incubate. Shortly after hatching, the young leave the nest. Both parents incubate their own nest and then tend and actively defend the young and lead them to food sources, where they feed themselves.

Although the species has been introduced to parts of western Washington, where it is somewhat common, Asotin, Garfield, and Columbia counties are the mountain quail’s native range. The species was once abundant in Klickitat County and may have been native there historically.

After being extirpated from portions of the historical distribution, 309 mountain quail were released in the Asotin Creek watershed between 2005 and 2013. Survival of released birds to six months of age post-release has ranged between 18 to 34 percent. It is not clear whether these attempts have established populations that will become self-sustaining. While incidental observations of mountain quail continue to occur in the area, deriving a population estimate for this small, widely dispersed population in remote habitat is not currently practical.

For maps of worldwide distribution and other species' information, check out NatureServe Explorer and the International Union for Conservation of Nature - Red List.

Mountain quail inhabit dry areas and are dependent upon surface and preformed water availability. They exhibit sensitivity to increased temperatures or changes in precipitation that limit water supply. Increased fire severity and frequency that results in the conversion of suitable habitat also increases the overall sensitivity of this species.

Mountain quail are managed as upland game birds. For current rules about hunting mountain quail in the state, be sure to check the Washington Game Bird and Small Game hunting regulations. For additional information about hunting opportunities and strategies, check out WDFW's Upland bird hunting and Quail Hunting pages.

Mountain quail is designated by WDFW as a “Species of Greatest Conservation Need” in Eastern Washington only.

See the Climate vulnerability section  for information about the threats posed by climate change to this species.