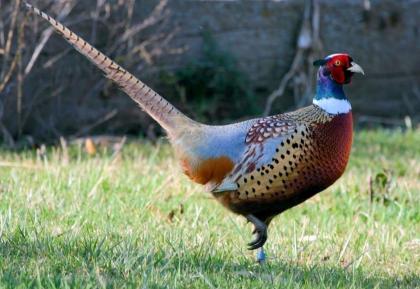 The ring-necked pheasant, which is not native to North America, is a recreationally important game species and the most popular upland game bird in Washington. Ring-necked pheasants are dependent on agricultural habitats and they thrive in non-crop vegetation around cultivated crops.

The ring-necked pheasant is one of the largest and certainly the most brightly colored of Washington’s upland birds. An adult male (rooster) ring-neck weighs 2 1/2 to 3 pounds and measures up to 35 inches from the tip of its beak to the tip of its tail. That long, pointed tail may account for over half the overall length. An adult hen pheasant weighs about 2 to 2 1/2 pounds and has a much shorter tail.

As with many bird species, the male ring-neck is much more colorful than the hen. The underside of a mature rooster is an iridescent rust-red on the lower neck and breast, turning darker on the belly and lighter with dark spots on the sides. A distinctive white ring runs around the middle of the neck, and above that most of the head is an iridescent dark blue-green with hints of purple.

Agricultural crops such as wheat, corn, soybean and sunflower are favorite ring-necked foods, but they also eat seeds from a variety of grasses, weeds and other plants. Pheasant chicks eat grasshoppers and other insects for the first six weeks of their lives.

Climatic and habitat conditions earlier in the year, especially in late spring and early summer, play a major role in determining what kind of success Washington pheasant hunters are likely to have finding wild birds in the fall. Cool, wet late-spring weather, for example, can be devastating to newly hatched chicks, while mowing, plowing and burning can destroy nests and kill young birds. Large numbers of pheasant chicks may starve if conditions are such that grasshoppers and other insects are in short supply. When these and other problems lead to poor reproduction and low chick survival, there are few young-of-the-year roosters available in the fall, and because yearling birds typically account for 80 to 90 percent of the fall harvest, the pickings can get pretty slim for hunters in those places where spring production is down.

The ring-necked pheasant is not native to Washington, or even to North America. Washington received its first ring-necks in 1883, and heavy plants were made in Western Washington in the early 1890s and in several areas of Eastern Washington later in that decade. The first Evergreen State pheasant season opened in 1897.

A few small, self-sustaining populations of ring-necked pheasants occur in the agricultural areas west of the Cascades, but the grain-producing lands on the east side of the state provide the best pheasant habitat and the highest ring-neck populations. WDFW also releases thousands of pen-raised birds in both Eastern and Western Washington to supplement the wild pheasant population and provide additional opportunity for upland bird hunters.

In Western Washington, hunters must have a Western Washington pheasant license (no small game license required). Hunters must choose either odd-numbered or even-numbered weekend days from 8 a.m. until 10 a.m. at all units of Lake Terrell, Tennant Lake, Snoqualmie, Skagit, Skookumchuck, and Scatter Creek Wildlife Areas, and all hunting sites on Whidbey Island.

Hunters with a 3-day pheasant license, hunters possessing a valid disabled hunter permit, hunters 65 years of age or older, and youth hunters (under 16) may hunt during either weekend day morning. Youth hunters on these areas during weekend day morning hunts must be accompanied by an adult at least 18 years old (if hunting, adults must have an appropriately marked pheasant permit). All hunters may hunt these areas between 10 a.m. and 4 p.m., regardless of their choice.

In Eastern Washington, hunters targeting pheasant, chukar and gray partridge must have a small game license.

Pheasant are hunted in every county in Washington. WDFW also manages pheasant release programs in Eastern Washington and Western Washington to increase opportunities for hunters and benefit pheasant habitat enhancement.

Ring-necked pheasants are found in most agricultural areas throughout Washington. However, they are only considered a "priority species" within the primary management zone delineated by Washington Department of Fish and Wildlife's Game Division in the southeastern part of the state.