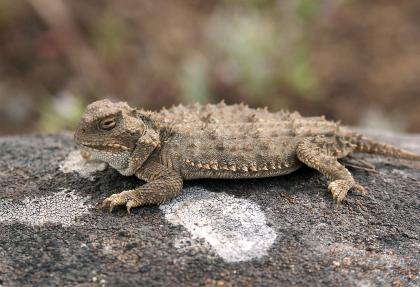 This lizard's status is of concern in Washington because the species primarily occurs in shrubsteppe habitat; most of this habitat has been and continues to be converted to other uses or degraded by frequent fires and invasive weeds.

The pygmy short-horned lizard is still locally common in some areas.

Pygmy short-horned lizards have a “toad-ish” shape and are often called “horned toads” or “horny toads.” They have a blunt snout, squat flattened body, short legs, and short, triangular tail. The length (without the tail) ranges from about an inch at birth to around 2.5 inches as an adult. Females are significantly larger than males. Spines or “horns” project from the back of the head and fringe-like spines occur on the sides. The dorsal (topside) pattern is mottled in white, gray, beige, tan, brown, black and sometimes yellow or orange. Dark blotches occur in transverse rows on the back. The underside is white, sometimes with a yellow or gray wash. Coloration and pattern varies from site to site as the lizard tends to match the substrate. Males have enlarged pores (femoral pores) on the midline of the underside of the thighs. Juveniles resemble adults.

In Washington, pygmy short-horned lizards occupy shrubsteppe habitat. They require soil conditions that allow them to burrow below the surface and substrate that is well-drained. Field research in Kittitas County found the lizards to have a disproportionate preference for lithosol terrain (rocky soils with sparse vegetation). Females in the final month of gestation, however, tended to use loamy (soils with a mix of sand, clay, silt, and organic matter) and ecotone terrains. Other findings of this study suggest populations may need a variety of substrate types to meet all their needs. In addition to these terrain types, pygmy short-horned lizards in Washington are also known to occur in loamy terrain without lithosols, on vegetated sand dunes, and even in some agricultural settings where patches of native habitat are present.

In Washington, these lizards are surface active starting in March and extending into early November depending on weather, air temperature, and elevation. Their cryptic coloration is part of their defense against predators. Adults are active mid-day during spring and fall, but in summer they are inactive during the middle of the day when temperatures are at their maximum.

Mating takes place soon after emergence in the spring. The female retains the eggs within her body and gives birth to young that are tiny miniatures of the adults.

A study in Kittitas County by a Central Washington graduate student found that newborn lizards ("neonates") feed almost exclusively on ants, while the adult diet was made up of about 72 percent ants.

Pygmy short-horned lizards reach the northern extent of their range in Washington and occur primarily in the Columbia Plateau Ecoregion. Abundance varies from site to site. The statewide trend is unknown.

This map from the Washington Herp Atlas illustrates the distribution of pygmy short-horned lizard in Washington based on records in the WDFW database as of 2016. If you see this species in areas that are not indicated on the map or have more recent observations (less than 10 years), please share your observation using the WDFW wildlife reporting form.

Little to no information exists regarding sensitivity of the pygmy horned lizard to climate change. Physiological sensitivity of this species may be low to moderate as it is inactive during cold weather or extended periods of heat, and it is a live-bearer. It appears to exhibit behavioral thermoregulation and burrows when inactive. Its inability to disperse long distances may increase sensitivity of this species. Overall sensitivity of this species is likely driven by its occurrence in shrubsteppe habitats, which are sensitive to altered fire regimes and invasive weeds. Though not as extremely myrmecophagous (ant-eating) as other horned lizards species, it is still preys rather heavily on ants (about three-quarters of the diet); its ability to switch to other prey should its ant prey decline as a result of climate change issues is uncertain.

Based on research done in Kittitas County, newborn lizards depend exclusively on a diet of ants and most of the adult pygmy short-horned lizard diet is made up of ants. Any actions that reduce the ant populations where this species occurs would likely be detrimental to this species. For instance, pesticides that kill ants should not be used where pygmy short-horned lizards occur. More research is needed on whether this species can switch prey if ants are not available.

This species’ tolerance to agriculture also needs further investigation. In Douglas County, a University of Washington scientist teamed with the Waterville Elementary School to create the “Adopt-A-Farmer” project that matched children to local farmers who reported their observations of this lizard. The findings suggested this species was quite common locally on these privately-owned agricultural lands.