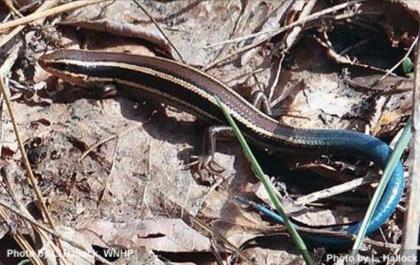 The western skink is the only lizard in Washington with a bright blue tail, shiny scales, and longitudinal stripes. (Lisa Hallock, Washington Dept. of Natural Resources)
Category: Reptiles
Family: Scincidae - Skinks
Ecosystems: Shrubsteppe
If you see this species, please share your observation using the WDFW wildlife reporting form. Providing detailed information such as a photo and exact coordinates will improve the confidence and value of this observation to WDFW species conservation and management.

Occurrences of this lizard are widespread throughout their range and no declines have been reported.

The lack of recent observations from some areas is likely due to a lack of survey effort and interest, as well as their secretive nature.

According to NatureServe, the state conservation status of the western skink population is considered “secure” in Washington.

The western skink is a small, slim, striped lizard with shiny scales, short legs and a long bright blue tail. The bright blue tail fades with age to dull blue, gray or brownish gray. Adults are 2 to almost 3 inches snout to vent length with a tail that is 1.5 to 2 times the body length. The mid-dorsal (topside) stripe is brown and bordered on each side by alternating dark (brown or black) and light (cream, beige, or gray) stripes. The underside is light without markings. The tail is easily shed. Males develop a reddish tinge on the sides of the head and chin during the breeding season.

Hatchlings and juveniles are similar to adults, but the coloration is more intense and the tail is always blue.

Typical habitats are dry open forests, shrubsteppe, and grassland. On the margins of their Washington range, they occur in openings within more heavily forested habitat. They often occur near water such as creeks or ponds, but also occur in dry habitats far from water.

Western skinks are active during the day but are alert, secretive and rarely seen in the open. Most are found by turning rocks and woody debris. They are quick and agile; it is not uncommon to see only a flash of blue as they escape into woody debris or rocks. In areas without woody debris, searching under shale-like rocks at the base of basalt outcrops can be particularly productive, especially if the rocks are in contact with the ground.

This species’ activity starts in late March to early April depending on location and weather conditions. Similar to our other lizard species, activity probably continues into October. The timing of breeding and egg laying have not been described for Washington. In Utah, mating occurs in May or June, eggs are laid in July and hatch in August. In Idaho, hatchlings also appear in August.

This is primarily a lizard of eastern Washington, occurring in the East Cascades, Okanogan, Columbia Basin, Northeast Corner and Blue Mountain ecoregions. A few locations have also been documented in southern Skamania County (West Cascades Ecoregion).

This map from the Washington Herp Atlas illustrates the distribution of western skink in Washington based on records in the WDFW database as of 2016. If you see this species in areas that are not indicated on the map or have more recent observations (less than 10 years), please share your observation using the WDFW wildlife reporting form.

The state conservation status of the western skink is “secure” based on the assumption that it is common according to the most current records. It is important to note that even during intensive searching, it is possible to miss this species due to their secretive nature.

St. John, A. 2002. Reptiles of the Northwest: California to Alaska, Rockies to the Coast. Lone Pine Publishing. 272 pp.