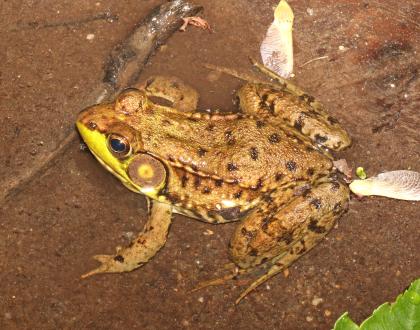 This non-native frog in Washington has a fold extending from the eye to  around the eardrum, plus it has parallel ridges along its back.  (Alan Schmierer - Creative Commons Public Domain)

The northern green frog is native to the eastern United States. The frog has been introduced to Washington in a few places. NatureServe identifies the status of the northern green frog as an “exotic” (non-native) in Washington. Documented occurrences are in Whatcom, Stevens and King counties. Populations introduced to Washington were probably for harvest of frog legs, but little has been published regarding the species in the state.

The northern green frog is a large, heavy-bodied frog with a distinct fold of skin (supratympanic fold) that extends from the eye, around the posterior (upper) edge of the external ear (tympanum) to the shoulder. Two distinct parallel ridges of skin (dorsolateral folds) are present on the dorsal (upper) sides of the body. The tympanum has a light-yellow area in the center.

Adults attain sizes up to 4 inches snout to vent length. The dorsal color is tan, brown or olive-brown with little to no black speckling. Dark spots may be present on the dorsal surface. Dark bands are present on the legs. Adults have green pigmentation on the sides of the head. Ventrally (underside), the body and legs are white to cream colored. Females may have some dark chest mottling. Juveniles resemble adults. Mature males have a tympanum much larger than the size of the eye, whereas females have a tympanum similar in size to the eye. Mature males also have a bright yellow throat and gray swollen pads (nuptial pads) on the thumbs.

Northern green frog tadpoles are easy to distinguish from all native Washington tadpoles. The tadpole (aquatic larval stage) has an oval body with dorsal eyes. The dorsal (topside) fin terminates on the body and the tail tip is pointed. Large tadpoles (greater than one inch total length) are olive green dorsally with dark spots over the dorsal surface. The ventral surface (underside) is opaque and cream colored with a coppery sheen. The throat area has dark green mottling. Small tadpoles (less than one inch total length) are darker. Tadpoles may attain a length of 3.5 inches total length before metamorphosis.

American bullfrogs tadpoles are similar but have distinct black flecks (not spots) over the dorsal surface and the belly has no metallic pigmentation. Bullfrogs also lack the dark green pigmentation on the throat.

A female lays 1000 to 5000 eggs in a thin film at the water surface usually attached to vegetation. The eggs typically cover an area less than 12 inches in diameter. Three gelatinous layers (envelope) surround the egg (ovum).

The non-native American bullfrog is the only species one will encounter in Washington with an egg mass similar to the northern green frog. The American bullfrog is widespread in the lowlands of Washington; their egg mass differs in being larger than 12 inches in diameter, being more than one egg layer thick, and individual eggs have only one gelatinous layer (envelope) surrounding the egg (ovum).

Throughout the summer, Northern green frog males produce vocalizations. The species has a low-pitched, single-note advertisement call that sounds like a low-note banjo string being plucked “Clung!” This call may be given as a single note or repeated several times in a row. Alarmed green frogs, basking on water edges, produce a loud squawk as they dive into the water.

In their native range they occupy water bodies including wetlands, ponds, lakes, sloughs, creeks, and rivers. Adults are primarily “shore frogs,” spending most of their time on the edges of the water body they occupy. Juveniles will disperse into terrestrial habitats during rainy periods. Breeding habitats include a variety of permanent water bodies.

Life history traits are probably similar to the American bullfrog. Calling likely commences in May or June. Egg laying likely takes place June to August. Tadpoles transform their first year or may overwinter and transform their second year.

Males hold territories scattered around the edges of permanent water bodies. Males aggressively defend their territories by wrestling invading males out of the territory or under water. Females approach males at their calling stations, apparently selecting males for mating based on habitat conditions at the calling site.

Egg development is rapid, taking anywhere from a few days to a week depending on water temperatures. Tadpoles grow quickly and may metamorphose their first year or may over winter and metamorphose their second summer. The tadpoles can grow to large sizes, 3.5 inches total length or more, before metamorphosis.

This map from the Washington Herp Atlas illustrates the known distribution of northern green frog in Washington as of 2016. Populations are present just north of the Canadian-American border. It is possible the species has expanded its range into northern Whatcom County.

It is unlawful to take from the wild or import into Washington, hold, possess, offer for sale, sell, or release all frog species into the wild without the proper license to do so (WAC 220-450-030).

The northern green frog is classified as a “regulated” aquatic animal species under Washington law RCW 77.135.030.

It is against the law to release non-native species into state waters through intentional or unintentional means.

NatureServe identifies the status of the northern green frog as “exotic” (non-native) in Washington. These frogs are smaller than American bullfrogs and, therefore, may not be as problematic to native amphibians when it comes to predation. Competitive interactions and introduction of disease are potential issues.