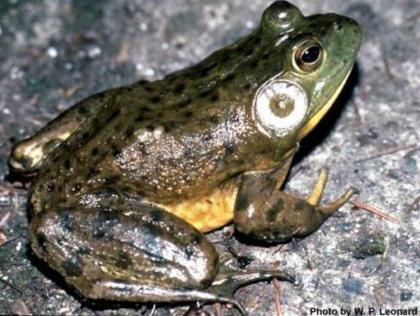 American bullfrogs have a fold from the eye along the upper outer edge of the tympanum (circular membrane over the eardrum).   (W.P. Leonard, Copyright) 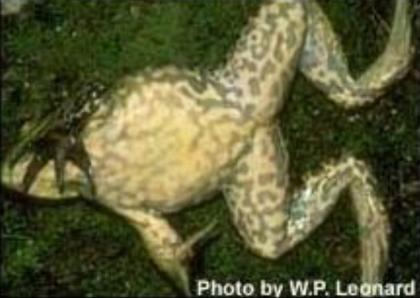 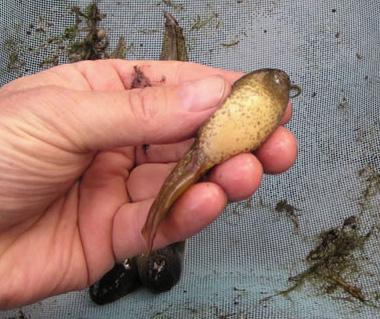 The American bullfrog is North America’s largest frog. These bullfrogs are native to the eastern United States. They have been introduced throughout the west since the early part of the 1900s and have become widespread. The bullfrog is now considered an invasive problematic species in Washington. NatureServe identifies the status of the American bullfrog as an “exotic” (non-native) in Washington.

Current Washington regulations prohibit transport of live bullfrogs or bullfrog tadpoles without a Washington Department of Fish and Wildlife permit.

The American bullfrog is a large, heavy-bodied frog with a distinct fold of skin (supratympanic fold) that extends from the eye, around the posterior edge of the external ear (tympanum) to the shoulder. No other native Washington frog or toad has this trait.

Adults attain sizes up to 4.5 inches snout to vent length. The dorsal (topside) color is tan, brown or olive-brown with varying amounts of black mottling and speckling. Adults typically have some green pigmentation in the area between the upper jaw and eyes. Ventrally (underside) the body and legs are white to cream colored with dark mottling.

Juvenile bullfrogs resemble adults but have distinct inky black specks on the dorsal surface. Neither adults nor juveniles have dorsolateral folds or an eye mask.

Full-sized adults are approximately two times larger than any of Washington’s native True Frogs (ranids) and about a third larger than the non-native American green frog. The American green frog (Rana [Lithobates] clamitans) has been introduced to Washington in a few places. The green frog has supratympanic folds but has dorsolateral folds that are easily distinguished from bullfrogs that do not have this trait.

The tadpole (aquatic larval stage) has an oval body with dorsal eyes. The dorsal fin terminates on the body and the tail tip is pointed. Tadpoles less than one inch total length are black with gold blotches and relatively short tails. Larger tadpoles are olive green with distinct inky black specks over the dorsal surface. The ventral surface is opaque cream to yellow colored with no metallic pigmentation. Tadpoles may attain a length of 4.3 inches total length or more before metamorphosis.

A female American bullfrog lays thousands (greater than 6000) of eggs in a thin film at the water surface. The eggs typically cover an area greater than 12 inches in diameter. One gelatinous layer (envelope) surrounds the egg (ovum). The eggs often sink to the bottom before hatching.

The non-native American green frog is the only species one might encounter in Washington with an egg mass similar to the American bullfrog; but note that this species is currently documented from only three Washington locations. The overall size of the American green frog’s egg mass is less than 12 inches in diameter and the mass is only one egg layer thick. Three gelatinous layers (envelopes) surround the egg (ovum).

The advertisement call of the American bullfrog is a loud, deep, bass call that is repeated several times in each series. The call has been described as “jug-o’-rum” and “br-rum.” The species’ common name comes from the fact that the call resembles the roar of a bull heard from a distance. When alarmed, juveniles basking on water edges produce a loud and startling “squeak” as they dive into the water. Listen to the calls of the American bullfrog in this short audio clip courtesy of W.P. Leonard.

Both American bullfrog and American green frog males produce vocalizations throughout the summer. This habit can be helpful in determining which species is breeding at a site. The green frog produces a low-pitched, single-note advertisement call that sounds like a low-note banjo string being plucked “Clung!” This call may be given as a single note or repeated several times in a row.

American bullfrogs are found in lowland permanent water bodies including wetlands, ponds, lakes, sloughs, creeks and rivers. Although they are primarily a “shore frog” they occasionally move to terrestrial sites at night and they will disperse over land, en mass, on warm rainy nights. Juvenile bullfrogs have also been observed in road puddles at some distance from aquatic habitat. Puddles and other sources of temporary standing water may be important habitat features for dispersing individuals.

Breeding habitats include a variety of permanent still-water bodies. Bullfrogs are able to exist and breed in water bodies with exotic warm-water fish. Some studies show they may even benefit from the presence of these fishes.

Bullfrogs are the last frog in the order Anura to become active and breed in Washington. They are rarely encountered before April and calling does not commence until May or June.

Males hold territories scattered around the edges of permanent water bodies. They aggressively defend their territories by wrestling invading males out of the territory or under water. Males call sporadically throughout the day. Calling frequency increases at night and males call in synchrony (“chorusing”). Chorusing may also occur during the day at the height of breeding season. Females approach males at their calling stations. Once in amplexus, the pair moves to a different area to lay eggs.

Eggs are laid in June and July. In some places, breeding may extend into August. Egg development is rapid. Depending on water temperature and other site factors, time to hatching can be a few days to a week. Tadpoles grow quickly but do not metamorphose until their second or third summer. For transformed frogs, most surface activity ceases in November.

The number of tadpoles and juvenile frogs at a pond, especially in the Columbia Basin, can be astonishing in some locations. Because the tadpoles are unpalatable to fish, they are more visible than most of our native frog tadpoles. Small tadpoles can be observed grazing on submerged portions of lily pads and other vegetation. Large tadpoles are often visible in shallow water on the edges of ponds. They will quickly retreat to vegetation in deeper water if disturbed. Larger tadpoles will also gulp air at the water surface. This behavior is helpful in determining if a pond is occupied but must be used with the knowledge that larger Great Basin spadefoot tadpoles, larval tiger salamanders and some aquatic insects also breach the water surface.

Bullfrogs are active both day and night depending on temperature. They are alert, fast frogs that remain motionless until approached closely. When approached, basking bullfrogs always flee into water and then dive into muck or vegetation. When scooped up in a net, captured individuals often remain completely motionless.

In Washington, American bullfrogs have been reported from lower elevations in all ecoregions except the Blue Mountains Ecoregion. Most documented sites are in the Puget Trough, Columbia Plateau and Canadian Rocky Mountain ecoregions.

This map from the Washington Herp Atlas illustrates the known distribution of American bullfrog in Washington as of 2016. You can report observations of this species to the Washington Invasive Species Council.

These frogs can be controlled without a permit. No license is required to hunt bullfrogs, there are no bag limits, and the season is open year round (WAC 220-12-090). Bullfrogs can be taken by angling, hand dip netting, spearing (gigging), or with bow and arrow only (WAC 220-416-120). Bullfrogs must be dispatched on site. Physical euthanasia is recommended.

NatureServe identifies the status of the American bullfrog as “exotic” (non-native) in Washington.

Research efforts involving this species have focused on the impact Bullfrogs have on native species, particularly True Frogs (ranids).

Bullfrogs in their native range are important in structuring amphibian communities. Bullfrogs have been suggested to have negative impacts on native Washington species, especially the Oregon spotted frog, northern leopard frog, and western pond turtles.

In addition to predation and competition, there are also concerns that bullfrogs may be vectors for diseases that can infect native frog populations.

Lardie, R.L. 1963. A brief review of the bullfrog as a conservation problem with particular reference to its occurrence in Washington State. Tricor 3(1): 7-9.