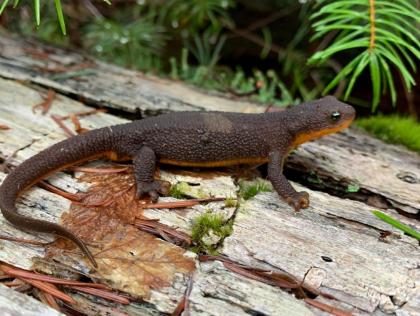 Rough-skinned newt  (Chayse Emge)
Category: Amphibians
Family: Salamandridae
If you see this species, please share your observation using the WDFW wildlife reporting form. Providing detailed information such as a photo and exact coordinates will improve the confidence and value of this observation to WDFW species conservation and management.

This species is common and occurs throughout western Washington. No widespread declines have been documented.

According to NatureServe, the state conservation status of the rough-skinned newt population is considered “secure” in Washington.

A medium to large-sized, stocky, brown salamander with a rounded snout, rough glandular skin, and a bright orange underside. Aquatic phase males are similar but have smoother skin, enlarged forearms and a laterally flattened tail with a small but distinct tail fin. Adults are 2.4 to 3.5 inches snout to vent length and 4.33 to 7 inches total length.

In comparison, torrent salamanders (Rhyacotriton spp.) differ in having costal grooves, smooth skin, large eyes, white speckling on the sides of the body and the males have squared cloacal lobes. Torrent salamanders are also much smaller (adult 1.8 to 2.2 inches snout to vent length) than rough-skinned newts.

During the breeding season male rough-skinned newts have conspicuously swollen vent lobes while females have only a slight conical swelling around the vent.

The larvae are pond-type with large gills and a high tail fin. Rough-skinned newts are our only salamander larvae that have eyes on the margins of the head and a snout that narrows in front of the eyes. A faint horizontal stripe is present from the snout through the eye, and one or two distinct rows of white spots occur on the sides. A salmon-colored area is present on the underside of the chest. Metamorphosis takes place when larvae are approximately 1.2 to 2.75 inches in total length.

The rough-skinned newt is one of only three Washington amphibians (includes tiger salamander and long-toed salamander) that lays single eggs, but it is the only one that hides its eggs within vegetation. The ova are small (0.7 inches diameter). The ovum (egg) is tan above and cream below with a thin layer of jelly surrounding the capsule. The jelly retains its shape out of water.

In comparison, tiger salamanders lay similar sized single eggs but attach them to vegetation where the eggs are exposed. Long-toed salamanders have single eggs that are larger (greater than 0.4 inches diameter including gel) with gel that does not hold its shape out of water.

At low elevation sites in western Washington, rough-skinned newts are active year-round. Terrestrial forms can be observed migrating in streams and creeks to ponds starting in January.

Courtship displays and pairs in amplexus are most obvious in March and April at low elevation sites. Newts that occur at higher elevations start breeding soon after snow and ice melt. Eggs are laid soon after mating takes place. Newts are the last of our salamander species to breed and the last salamander larvae to hatch.

When threatened, newts arch the head towards the tail (“unken reflex”). This posture reveals the bright orange coloration of the underside that warns predators of its toxicity. With the exception of the common garter snake (Thamnophis sirtalis), few vertebrate predators can survive ingesting a rough-skinned newt. The highly toxic nature of this species allows them to be one of the few terrestrial salamanders active and conspicuous during the day. The toxin (tetrodotoxin) is produced within the skin, not secreted. Newts can be handled safely but care should be taken with small children prone to putting things in their mouths. After handling any amphibian, one should avoid touching the mucus membranes of the eyes, nose and mouth until hands have been washed.

This map from the Washington Herp Atlas illustrates the distribution of rough-skinned newt in Washington based on records in the WDFW database as of 2016. If you see this species in areas that are not indicated on the map or have more recent observations (less than 10 years), please share your observation using the WDFW wildlife reporting form.

The state conservation status of the northwestern salamander is “secure” based on the assumption that it is common according to the most current records.

In some areas, newts migrate in large groups to breeding ponds. If the migratory path crosses a road with heavy traffic, mortality can be high and could potentially threaten a local population.

Batrachochytrium salamandrivorans (Bsal) is a pathogenic chytrid fungus disease that infects amphibian species. Salamanders, particularly newts, seem to be the most susceptible. In western Europe, this disease has wiped out certain species of newts from entire areas. As far as we know, it is not yet in the United States.