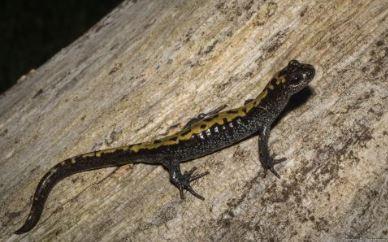 Note the salamander's long outer fourth toe on its hind limb. ( Charles Peterson, Creative Commons License BY-NC2.0))
Category: Amphibians
Family: Ambystomatidae
If you see this species, please share your observation using the WDFW wildlife reporting form. Providing detailed information such as a photo and exact coordinates will improve the confidence and value of this observation to WDFW species conservation and management.

These are the most widespread and, frequently, the most abundant salamander species encountered in Washington. They do not appear to require special conservation actions at this time.

According to NatureServe, the state conservation status of the long-toed salamander population is considered “secure” in Washington. However, historically introduction of salmonid fishes, especially brook trout, to a broad range of high elevation lakes, may have resulted in lower abundance and occupancy of long-toed salamanders in those systems.

This is a medium-sized dark gray or black salamander with an irregular yellow, olive or green dorsal stripe, distinct costal grooves, a broad head and rounded snout. Adults range in size from 2.13 to 3.25 inches snout to vent length. The dorsal stripe is often irregular and broken into spots. The sides of the body have blue or white speckling. The underside is black or gray. The tail is laterally compressed. The common name refers to the unusually long fourth hind toe (next to the outer-most toe). During the breeding season males have a swollen vent.

Hatchlings are 0.24 to 0.5 inches total length and have balancers (rod-like structures on each side of the head). Larvae are typical pond type with large gills and a high tail fin. Gill filaments are “ragged” and uneven in length. The top gill filament is usually longer than the remaining gill filaments on the stalk. Fewer than 13 gill rakers exist on the anterior face of the third gill arch. Larvae rarely exceed 3.35 inches total length. The dorsal stripe develops at metamorphosis.

At hatching, long-toed salamanders have balancers and tiger salamanders do not. Otherwise, the small larvae (less than 2 inches total length) of the three species of mole salamander (Genus Ambystoma) native to Washington are similar in appearance. With experience, one can recognize differences in the gills, the way the larvae hold their gills, head size, head shape and coloration. Differences are subtle and may not be obvious to the novice.

Both single eggs and egg masses may be present at the same breeding site. Single eggs may be spread throughout the habitat or clustered in small clumps on vegetation. The egg masses typically contain 10 to 20 eggs, but smaller or larger clusters are common. Individual eggs (ovum and gelatinous envelope together), whether laid singly or in a mass, measure 0.4 inches or greater in diameter. The ova are approximately 0.07 to 0.1 inches diameter, with dark animal poles and gray or white vegetal poles. Except in newly laid eggs, the gelatinous envelope is loose and watery and does not hold its shape out of water. Development time to hatching is 2 to 5 weeks depending on water temperature.

Tiger salamanders and rough-skinned newts lay small single eggs (ovum and gelatinous envelope together) that are less than 0.4 inches in diameter when fully expanded. Pacific treefrogs and Great Basin spadefoots have egg masses that are similar, but both species have individual eggs (ovum and gelatinous envelop together) that are 0.2 inches or less in diameter when fully expanded.

For more details about the long-toed salamander, see the Washington Herp Atlas.

Check out this short video about long-toed salamander.

Long-toed salamander are typically sparse or absent from water bodies with fish, although this varies with habitat complexity. Transformed salamanders spend most of their lives underground except when migrating to and from breeding sites. They are thought to be poor burrowers and may generally depend on interstitial spaces between rocks or where roots, rotting wood, or the tunnels of other animals allow easy underground access.

While surface active in the spring, they seek refuge under decaying logs, loose bark, rocks and other structures that retain moisture. Overwintering habitat in Washington has not been described but is most likely subterranean.

Long-toed salamanders in lowland areas of western Washington start breeding as early as January. In the Columbia Basin, egg laying takes place primarily in March and April. Breeding at higher elevations starts later and timing varies depending on elevation and site conditions.

Egg laying behavior, with eggs being laid both singly and in masses, is highly variable. Some variability is geographic and may reflect incomplete understanding of long-toed salamander systematics. Eggs may be attached to vegetation, the underside of logs or laid unattached on bare sediments.

Egg development time to hatching is two to three weeks depending on water temperature. The length of the larval period is variable depending on site conditions; food resources and temperature appear to strongly influence differences.

Metamorphosis takes place in the summer or fall of the first year. At high elevations, larvae may overwinter and transform the following year.

In Washington, long-toed salamanders are the most widespread, possibly the most common salamander species and occur in all ecoregions. Occurrences are sparse in coastal areas of the Pacific Northwest Coast Ecoregion and in the driest portions of the central arid shrub-steppe zone of the Columbia Basin Ecoregion.

This map from the Washington Herp Atlas illustrates the distribution of long-toed salamander in Washington based on records in the WDFW database as of 2016. If you see this species in areas that are not indicated on the map or have more recent observations (less than 10 years), please share your observation using the WDFW wildlife reporting form.

The state conservation status of the long-toed salamander is “secure” based on the assumption that it is common according to the most current records.

Larval abundance is reduced or eliminated in alpine lakes with introduced trout. This should be considered before non-native fish are introduced to long-toed salamander breeding habitats. Similar patterns may be occurring in lowland systems, but except for localized study, are unexamined to date.

Specific inventory needs do not appear to be pressing at this time; however, as long-toed salamanders seem to have a relatively low tolerance for co-occurrence with predatory fishes, especially exotic species, a better understanding of this phenomenon in context of their current distribution is needed.

Several warm water fish species, now widespread in lowland habitats in Washington, appear to have negative interactions with other amphibians, but their impacts on long-toed salamanders are largely unstudied. One potential effect of these introductions is that long-toed salamanders may use more temporary water bodies (such as small, isolated wetlands) for breeding than occurred historically because the exotic species occupy the permanent water bodies. This deserves study.