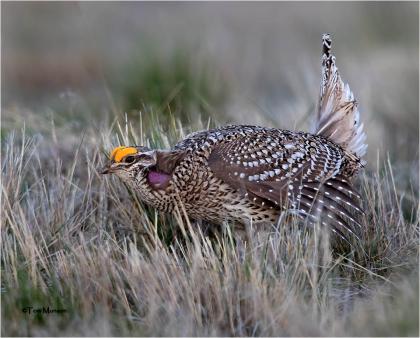 This species is considered a medium-sized grouse. The total length is 17 inches. Males are heavier than females. In both sexes, the body is round, with short legs, short crest, and elongated central rectrices (tail feathers). Head, neck, back, and wings are heavily barred with dark brown, blackish, and buff coloring, while breast feathers are white, with tawny drab margins. The upper belly feathers are white. When this species is observed on the ground, it exhibits a "frosty" appearance. Nostrils and legs are feathered. Both sexes have a crescent-shaped, yellowish-orange comb over the eye. The male is identified by pinkish to pale violet air sacs on each side of the neck (exposed and inflated only during courtship displays).

Sharp-tailed grouse are a grassland and shrubsteppe species, and the Palouse prairie probably once supported the highest numbers in Washington. Diverse native grassland with sparse shrubs provides the best nesting habitat, but deciduous riparian habitat must be available in the area for overwintering. Sharp-tailed grouse will also use cropland near native habitat, such as wheat stubble and alfalfa, and this species benefits from the U.S. Department of Agriculture Conservation Reserve Program.

During spring and summer, this species eats a variety of “forbs” (non-woody flowering plants), grasses, and insects. During late fall and winter, particularly after snow covers the ground, sharp-tailed grouse will move to areas with riparian deciduous cover where they often eat buds and fruits of deciduous trees and shrubs, such as water birch, serviceberry, hawthorn, and aspen.

Males gather at lek sites in spring -- a lek is an assembly of male grouse engaged in courtship displays. At these sites, males perform elaborate dances to attract females for mating. Females nest under a grass clump or shrub and incubate a clutch of approximately 10 to 14 eggs.

The chicks feed on insects, gradually shifting to more plant material. Young chicks are particularly vulnerable to predators. Maturing broods aggregate into flocks in late summer. Annual adult survival of non-hunted populations ranges from 30 to 60 percent, and the maximum lifespan reported is seven and a half years.

This grouse is the rarest race of sharp-tailed grouse. Seven remnant populations of Columbian sharp-tailed grouse remain in Douglas, Lincoln, and Okanogan counties. Washington populations may have once numbered in the hundreds of thousands. The total population now numbers fewer than 1,000 birds, and they occupy less than 5 percent of their historical range.

For maps of range-wide distribution and conservation status of this species, check out  the International Union for Conservation of Nature - Red List and NatureServe Explorer.

See the Climate Vulnerability section for information about the threats posed by climate change to this species.