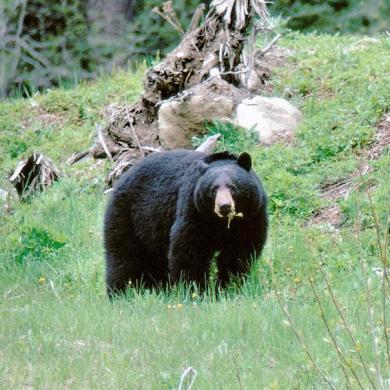 American black bears are the most common and widely distributed bears in North America. As human populations encroach on bear habitat, people and bears have greater chances of encountering each other. Bears usually avoid people, but when they do come into close proximity of each other, the bear’s strength and surprising speed make it potentially dangerous. Most confrontations with bears are the result of attractants like garbage and bird feeders. In the wilderness, it is recommended that people make noise as they travel to avoid surprising a bear at close range. All bears should be given plenty of respect and room to retreat without feeling threatened.

Despite their name, black bears may be a variety of colors, including black, brown, blond, cinnamon, and rust. Black or brown, with a light brown snout, is the most common coloration.

The black bear's face profile is straight, with a relatively long muzzle and long, prominent ears.

Black bears are common throughout Washington except for the non-forested areas of the Columbia basin. Black bears live in a diverse array of forested habitats in the state, from coastal rainforests to the dry woodlands of the Cascades’ eastern slopes. In general, black bears are strongly associated with forest cover, but they do occasionally use relatively open country, such as clearcuts and the fringes of other open habitat.

To hunt bear in Washington, you must purchase a big-game license that includes bear. For pricing and more information, see the hunting licenses page.

Washington is home to both grizzly bears and black bears. Grizzly bears are rare in Washington, but a small population exists in the Selkirk Mountains of northeast Washington, and their presence has been documented in the Okanogan Highlands and the North Cascades.

The bear identification is now available in WDFW's WILD system. Hunters must login with their username and password and click the "Mandatory Species Identification Tests" link.

Hunters who purchase their bear license and tag will need to take the test if they choose to hunt in the identified GMUs.

There are two primary seasons for black bear in Washington: the fall general season, and the spring special permit seasons. Learn more:

For more information about living with bears in Washington, see the following handouts:

All black bear prints usually show five digits. The toes form a rough semicircle in front of each foot, with the middle toe being the longest. Front foot tracks have small footpads, whereas hind foot tracks characteristically show an extended footpad, resembling a human foot. The claw marks are about ½ inch in front of the toe pads, but often the claw marks do not show in a track.

When plants, insects, and animal carcasses make up most of a bear’s diet, its droppings are cylindrical and typically deposited in a coiled form, sometimes in individual segments. Segments are 2 to 3 inches long and 1¼ to 1½ inches in diameter. Bits of hair, fur, bone, insect parts, and plant fibers distinguish these droppings from human feces, as does the large size of the deposit. Color ranges from dark brown to black, and when grasses are being heavily eaten droppings are often green. When fruits and berries are in season, droppings assume a moist, “cowpie” form and seeds are visible.

Black bears commonly leave a variety of marks on trees. Because young bears often climb trees, trees in high bear density habitats will show the telltale claw marks and hairs indicating that a bear has previously climbed the tree.

On young conifers, particularly Douglas-fir trees, bears will rip strips of bark off with their teeth to reach insects or the sweet-tasting sap found inside. The bear’s teeth leave long vertical grooves in the sapwood and large strips of bark are found around the bases of trees they peel. These marks are typically made from April to July, but the results may be seen all year. This foraging activity is common in tree plantations where large stands of trees are similarly aged and of a single species.

A bear may also rub its back against a tree or other object. Rubbing is a favorite summer pastime among black bears, relieving the torment of parasites and loosening their thick, matted winter coat. Good scratching trees may be used repeatedly for several years, and are easily identified by the large amounts of long black or brown fur caught in the bark and sap. Rough-barked trees often serve as rubbing posts.

It has been debated whether bears mark trees to convey social information akin to territorial marking in other carnivores. Such marks are most easily seen on smooth-barked species of trees—alder, aspen, birch, and white pine—on which tooth and claw marks will contrast most visibly, but any live or dead standing trees may be heavily chewed. Human structures such as utility poles, footbridges, and even outbuildings may also be chewed.

Bears tend to avoid humans. However, human-habituated bears are bears that, because of prolonged exposure to people, have lost their natural fear or wariness around people. Human-food-conditioned bears are those that associate people with food. Such bears can become aggressive in their pursuit of a meal.

Do everything you can to avoid an encounter with any bear. Prevention is the best advice.

If you are recreating in bear country, always remember: Never travel alone, keep small children near you at all times, and always make your presence known—simply talking will do the trick. Most experts recommend carrying bear spray when recreating in areas where bears or other potentially dangerous wildlife may be present. A bear spray that has a capsaicin (pepper) content between 1.3 and 2 percent can be an effective deterrent to an aggressive bear if it is sprayed directly into the bear’s face within 6 to 10 feet.

The number one reason for conflict, (95% of the calls to offices) are the result of irresponsibility on the part of people: Access to trash, pet food, bird feeders, and improper storage of food while camping make up the majority of the calls.

Bears may opportunistically seek food in human-occupied areas when natural foods are scarce. This occurs annually in early spring before natural foods become available and in late fall as bears prepare for hibernation. Additionally, in some years a late-arriving spring or drought conditions may increase the likelihood of this behavior.

If you live in areas where black bears are seen, use the following management strategies around your property to prevent conflicts:

Don’t feed bears. Often people leave food out for bears so they can take pictures of them or show them to visiting friends. Over 90 percent of human-bear conflicts result from bears being conditioned to associate food with humans. A wild bear can become permanently food-conditioned after only one handout experience. The unintended reality is that these bears will likely die, being killed by someone protecting their property, or by a wildlife manager having to remove a potentially dangerous bear.

Keep garbage cans with tight-fitting lids in a shed, garage, or fenced area. Spray garbage cans and dumpsters regularly with disinfectants to reduce odors. Keep fish parts and meat waste in your freezer until they can be disposed of properly.

In the unlikely event a black bear attacks you (where actual contact is made), fight back aggressively using your hands, feet, legs, and any object you can reach. Aim for the eyes or spray bear spray into the bear’s face.

Here are tips should you come in close contact with a bear:

For more information about living with bears in Washington, see the following handouts: