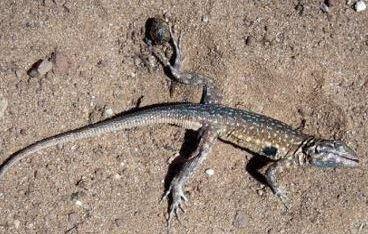 These are the only Washington lizards with a gular fold on the throat and a dark blotch on the body behind each forelimb. (National Park Service)
Category: Reptiles
Family: Iguanidae
Ecosystems: Shrubsteppe
Vulnerability to climate change (More details)

This lizard's status is of concern in Washington based on the small number of populations and a distribution that is restricted to the heavily altered shrubsteppe vegetation of eastern Washington.

This is a small (maximum size 2.2 inches snout to vent length) brown or gray lizard with a mottling of black, brown and light-colored markings on the dorsal surface. They are very cryptic and blend into their surroundings. A gular fold is present on the throat. Mature males have small, light blue spots on the back and an orange tinge to the neck, sides, forelimbs and tail.

Side-blotched lizards are associated with arid areas that support shrubsteppe habitat. They are most common in areas with bare ground interspersed with shrubs and other vegetation (e.g., shrubland with grasses). They also occupy dry washes, rocky canyons, sand dunes and road edges.

Typically, individuals can be seen on the ground at the edge or under shrubs or other vegetation that provides cover from predators. During the heat of the day and during rainy and/or cool periods, they retreat underground or move under cover objects such as rocks and woody debris.

Habitat for these lizards is degraded by invasive plants such as cheatgrass and knapweed that grow densely between shrubs and eliminate bare ground. Excessive livestock grazing can also degrade habitat by removing too much vegetation and damaging the lower limbs of shrubs. Without the lower limbs, shrubs do not provide retreats for side-blotched lizards.

In Washington, this lizard's activity typically starts in early to mid-March and continues through October. They are ground dwelling lizards that do not climb in vegetation although they will climb on rocks and basalt outcrops. They are gregarious and interact with other lizards, often under the canopy of shrubs. They are active mid-day during spring and fall but in summer are inactive during the middle of the day when temperatures are at their maximum. They are not surface active on rainy days or cool cloudy days.

Eggs are probably laid in May and hatchlings start to appear in mid-July.

Both adults and juveniles prey on insects and arachnids.

This map from the Washington Herp Atlas illustrates the distribution of side-blotched lizard in Washington based on records in the WDFW database as of 2016. If you see this species in areas that are not indicated on the map or have more recent observations (less than 10 years), please share your observation using the WDFW wildlife reporting form.

Side-blotched lizards appear to exhibit low reproductive sensitivity to climate, as warming temperatures (particularly warmer nights during breeding season) may increase reproductive output and subsequent survival. In Washington, side-blotched lizards are at the northern end of their geographic range, where they emerge later seasonally, have a shorter season of activity, and longer diel activity periods that are unimodal versus bimodal than at more southerly locales. Hence, warming trends linked to climate change are anticipated to result in earlier seasonal emergence, increase the length of seasonal activity, and perhaps shift unimodel diel activity periods toward bimodal ones. Further, side-blotched lizards appear to select specific temperature microhabitats, indicating behavioral thermoregulation. However, this species may exhibit some physiological sensitivity to changes in precipitation and warming winter temperatures (e.g., if warmer temperatures increase energetic demands).

Overall sensitivity of this species is somewhat higher due to its association with shrub-steppe habitats, which are sensitive to altered fire regimes and invasive weeds that degrade or eliminate habitat. Northern populations appear more dependent on grasshoppers and crickets than southern populations, but it is unclear how climate change may alter the side-blotched lizard prey base. Northern females generally lay one or two clutches of eggs during a 2 to 4 month oviposition period, whereas southern females lay one or two clutches over oviposition periods lasting as long as 5 to 6 months; hence, a shift in length of the oviposition interval may occur with increased seasonal breadth. Northern populations generally produce fewer clutches of large eggs, and produce fewer offspring each year. As northern populations appear primarily climatically challenged, climate change could reduce that challenge if the seasonal breath increases without disfavoring the available prey base, and altering energetic demands in a disfavorable way, i.e., making it more costly to maintain equivalent energy levels seasonally. High uncertainty in the pattern of response points to downgrading that confidence in the Sensitivity Rank from Moderate to Low-Moderate.

Lastly, thermal heterogeneity of microhabitats has been shown to be associated with higher rates of infection of microparasites, which result in lizards electing to bask at lower temperature outside their range of preferred temperatures. Hence, if climate change promotes thermal heterogeneity of microhabitats, it may induce a higher rate of infection of microparasites, which has uncertain, but potential negative consequences for side-blotched lizards.