This year, the Department celebrates its 25th Anniversary – twenty-five years since the legislature combined the Wildlife and Fisheries departments to bring a unified approach to habitat, fish, and wildlife management. Much has changed in those 25 years, but one thing remains constant. Washington's residents are benefiting from the work of the people and organizations that lead, stand beside us, and act for fish, wildlife and habitat in Washington. We hope you take the time to enjoy the few among many, many great examples, which we've shared below.

In collaboration with Chelan County Natural Resources, Department personnel from Wildlife and Habitat Programs and Regional Director, Jim Brown continued work to finalize a recreation planning document for future recreation management and to identify needed improvements, all while enhancing wildlife habitat conditions on the newly acquired lands in the Stemilt Basin area of southern Chelan County. The goals: providing recreation improvements while improving habitat through controlled burning, retiring old primitive roads, rerouting roads away from sensitive areas, and building shaded firebreaks for better control line placement and safety in the event of a wildfire. 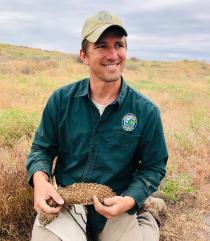 As the only owl in the world that nests exclusively underground, the western burrowing owl is very unique. These small birds measure 7 to 11 inches tall with a wingspan of 20 to 24 inches, and weigh just 5 to 8 ounces (about the same weight as a baseball).

Sadly, the burrowing owl range has greatly decreased in recent decades due to habitat loss. Burrowing owls are now uncommon or rare outside of Benton, Franklin, Grant, and western Adams counties.

Learn more about these unique birds and how WDFW is working with partners to monitor and protect them on WDFW's blog.

The abundance of Taylor's checkerspot butterflies in the South Puget lowlands reached remarkable levels for a second straight year. Two consecutive years of strong numbers across three sites has this federal and state endangered species dispersing in significant numbers across the larger landscape and moving towards recovery.

On Joint Base Lewis-McChord (JBLM), butterflies have been sighted on nearly every prairie, at distances two or more miles from the nearest source site. Reports of adult checkerspots at Scatter Creek Wildlife Area's north unit indicate similar movement distances there. Partners that share in this success include the U.S. Fish and Wildlife Service, JBLM, the Center for Natural Lands Management, DNR, The Oregon Zoo, The Evergreen State College's Sustainability in Prisons Project, The Department of Corrections, and Wolf Haven, among others.

In June, Department staff joined partners to celebrate the Merrill Lake project, which permanently protects 1,453 acres of prime wildlife and riparian habitat in southwest Washington. The Rocky Mountain Elk Foundation (RMEF) recently conveyed the final parcels of land to WDFW to be part of the Mount Saint Helens Wildlife Area. This project exemplifies the missions of both RMEF and WDFW to protect habitat for elk and other wildlife, while also securing public access for hunters, anglers, and outdoor recreationists. With the property's combination of listed species, unusual geology, spectacular waterfalls, artesian springs, and other features, this is a unique opportunity to provide landscape-scale connectivity of forested lands in conservation. The project was nearly nine years in the making and was a tremendous cooperative effort between RMEF and WDFW, while a significant grant from the Washington State Recreation and Conservation Office and generous RMEF donors made the final transaction possible.

WDFW's Oil Spill Team joined with Sealife Response, Rehabilitation and Research (SR3) and was awarded a $100,000 grant from the Washington State Department of Ecology to purchase equipment to respond to oiled sea otters.

The funds were used to acquire equipment that cannot be obtained commercially at the time of a spill and/or would be needed almost immediately to implement the response. We purchased eight 8-foot diameter and 4-foot deep saltwater pools with filtration systems, nets and sky kennels for sea otter recovery teams, and cages.

The Department is welcoming its newest member of the Aquatic Invasive Species Unit, "Puddles." Puddles was a rescue dog acquired and trained by Debi Deshon of "Mussel Dogs."

The acquisition was made possible through a grant received from the U.S. Bureau of Reclamation. Sergeant Pam Taylor spent two weeks in California, Arizona and Utah training with Puddles and Mussel Dogs, and Puddles is assisting the team with inspection of watercraft entering Washington in attempts to stop the introduction of quagga and zebra mussels. She can detect mussels that humans cannot see.

WDFW works with partners to save valuable and splendid sea snail

WDFW is working with federal and state partners to protect and conserve a species of large sea snail with a shell, a taste, and lifestyle that led to its wide-scale destruction.

The pinto abalone -- the only abalone species native to Washington -- has experienced a drastic reduction in population in recent decades. From 1992-2017, the population fell by an estimated 97 percent, putting the species at risk of local extinction. Historically prized as food and for its contrasting red and green shell with an iridescent interior, pinto abalone is a species that has been too popular for its own good. Now, thanks to funding commitments from the legislature and work with partners like the Puget Sound Restoration Fund, we are expanding the pinto abalone recovery effort at conservation hatchery facilities and through field research.

Department and U.S. Forest Service biologists, working collaboratively, visited three Northern Pacific rattlesnake dens in the upper Methow Valley. They observed around 100 snakes between the three sites, including individuals from all age classes, suggesting these sites are supporting healthy, self-sustaining populations. This is part of a long-term effort to document the distribution, status, and ecology of this often misunderstood species near the edge of its range.

WDFW partners with Ducks Unlimited to benefit wildlife near Westport 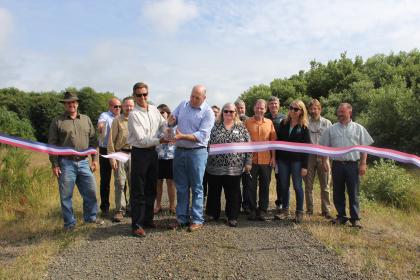 In close partnership with Ducks Unlimited, WDFW recently finalized the purchase of 1,100 acres near Westport in Grays Harbor County. WDFW will manage the new property, named the Grayland Unit. The Grayland Unit features diverse natural resources, including large freshwater and saltwater wetland areas and old-growth Sitka spruce trees. Ducks Unlimited partnered with WDFW to secure funding for the property, and provided in-kind matching funds for negotiations and closing. In addition to their funds, grants from U.S. Fish & Wildlife Service and the Washington State Recreation Conservation Office made this purchase possible.