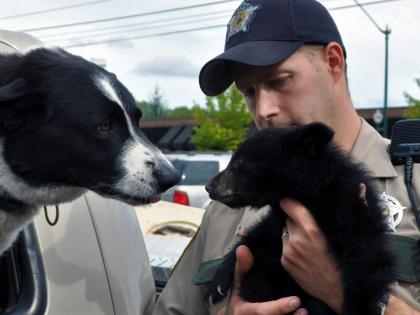 In 2003, Washington Department of Fish and Wildlife biologist Rocky Spencer partnered with a young, black-and-white dog with an ambitious mission in mind: To reduce conflicts between bears and humans in Washington state.

Over a decade later, more of these rare and remarkable dogs have joined the WDFW, helping investigate poaching cases, providing a deterrent to bears growing a little too comfortable with civilization, and even assisting police in a homicide investigation.

The Karelian bear dog has been bred and used for centuries by hunters and farmers in Finland and Russia, but today they fill a unique role with the department. Among their many jobs:

Though Mishka, WDFW’s original Karelian bear dog, retired in 2015, his legacy lives on in the other bear dogs that now provide invaluable services for the department. And the program couldn’t exist without the support of the public, whose generous donations keep the dogs working hard to protect the people and wildlife of Washington state.

Donate to the program

The Karelian Bear Dog Program is 100 percent supported by private donations. Because this is a budget-neutral program, no funds are paid from the WDFW agency budget. By donating today, you can help support the mission of these hardworking dogs.

State of Washington employees may also donate to the Karelian Bear Dog Program through the Combined Fund Drive.