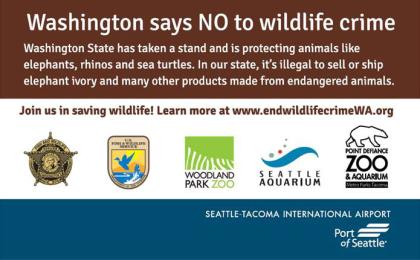 Wildlife trafficking – the illegal trade of animal products – is pushing numerous species to extinction around the world. This multibillion-dollar international black market involves indigenous species from many nations, including the U.S.

Links to the federal strategy and implementation plan are available from the State Department website.

In support of these strategies, Washington joined several other states in passing laws to protect certain endangered species and strengthen penalties for traffickers that trade them.

Introduced as Initiative 1401 – and overwhelmingly passed by voters in 2015 – the Washington Animal Trafficking Act (WATA) expands state authority to regulate illicit markets on a local level and provides penalties for noncompliance. WATA provides Washington Department of Fish and Wildlife Police with the authority to protect certain subspecies of 10 of the world's most illegally traded endangered species:

WDFW Police is the primary enforcer of this new law, which represents a significant new responsibility for the agency. The department has detectives that specialize in investigating illegal trade in local natural resources, and officers have a presence at border crossings and marine and air ports.

Implementing WATA, however, represents additional challenges for the department. Success in protecting endangered and threatened species depends upon bolstering cross-border partnerships, as well as increasing the resources necessary to focus on the problem.

WDFW is seeking ways to increase police officer presence at ports of entry. The department also has applied for grants to purchase two dogs, which can detect contraband. Additionally, WDFW is working to develop partnerships with forensic labs and with conservation organizations, as well as with representatives from numerous international and national governments to build support for a coordinated approach to curbing this problem.

The department also is working with the state Legislature to increase resources for the effort.